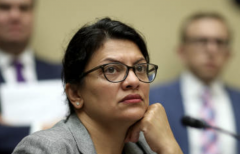 (CNSNews.com) - Rep. Rashida Tlaib (D.-Mich.) sent out a tweet on Monday, responding to the shooting death of Daunte Wright, in which she concluded that policing in the United States is “inherent and intentionally racist.”

Daunte Wright was shot and killed by a police officer in Brooklyn Center, Minn., on Sunday, during a traffic stop.

“Daunte Wright, 20, died Sunday in a metropolitan area that was already on edge because of the trial of the first of four police officers charged in George Floyd’s death,” said the AP.

“Gannon said at a news conference that the officer made a mistake, and he released body camera footage from the officer who fired,” the AP reported. “The footage showed three officers around a stopped car. When another officer attempts to handcuff Wright, a struggle ensues. The officer is heard shouting ‘Taser!’ several times before firing her weapon.”

“It wasn’t an accident,” Tlaib said in a tweet on Monday.

“Policing in our country is inherently & intentionally racist,” she said.

“Daunte Wright was met with aggression & violence,” said Tlaib. “I am done with those who condone government funded murder.

“No more policing, incarceration, and militarization. It can’t be reformed,” she said>