Reporter Asks About Putin: ‘Is He Threatening a Nuclear Strike?’ Biden: ‘I Have No Idea What He’s Threatening’ 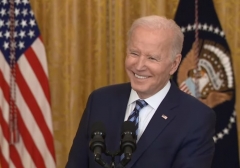 (CNSNews.com) - As reporters were asking President Joe Biden questions after his speech on Russia’s invasion of Ukraine today and the sanctions the United States and its allies would be imposing on Russia, Cecilia Vega of ABC News asked him about a statement made by Russian President Vladimir Putin that if anyone interfered with what Russia was doing in Ukraine they would “face consequences greater than any you have faced in history.”

Vega wanted to know if Biden believed Putin was threatening “a nuclear strike.”

“This statement that he gave last night,” she said, “the threat that he gave: The West will face consequences greater than any you have faced in history. Is he threatening a nuclear strike?”

“I have no idea what he’s threatening,” Biden responded. “I know what he has done.”

Putin made the threat in a speech that was broadcast early on Thursday morning in Russia.

“To anyone who would consider interfering from outside: If you do, you will face consequences greater than any you have faced in history,” said Putin.

Here is a transcript of the Thursday afternoon exchange between Cecilia Vega of ABC News and President Biden:

Cecilia Vega of ABC News: “Sir, sanctions clearly have not been enough to deter Vladimir Putin to this point. What is going to stop him? How and when does this end? And do you see him trying to go beyond Ukraine? And a second question I will just give to you now. This statement that he gave last night, the threat that he gave: The West will face consequences greater than any you have faced in history. Is he threatening a nuclear strike?”

President Joe Biden: “I have no idea what he’s threatening. I know what he has done. Number one. And number two: No one expected the sanctions to prevent anything from happening. That has to--It’s going to take time and we have to show resolve. So, he knows what’s coming. And so the people of Russia know what he’s brought on them. That’s what this is all about. This is going to take time. It’s not going to occur—He’s going say, ‘Oh, my God, these sanctions are coming. I’m going to stand down.’ He’s going to test the resolve of the West to see if we stay together. And we will. We will and it will impose significant costs on him.”

Vega: “Will he go beyond Ukraine, sir? Do you see him going—“

Biden points to another reporter: “Yes.”