Romney on Advancing Same-Sex Marriage Bill: ‘Congress—and I—Esteem and Love All of Our Fellow Americans Equally’ 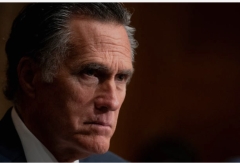 (CNSNews.com) -Sen. Mitt Romney (R.-Utah), who was the losing Republican presidential nominee in 2012, voted on Wednesday to move forward to a final vote in the Senate on the “Respect for Marriage Act,” which would recognize same-sex marriages in federal law.

“While I believe in traditional marriage, Obergefell is and has been the law of the land upon which LGBTQ individuals have relied,” said Romney. “This legislation provides certainty to many LGBTQ Americans, and it signals that Congress—and I—esteem and love all of our fellow Americans equally.”

“This legislation provides important protections for religious liberty—measures which are particularly important to protect the religious freedoms of our faith-based institutions,” said Romney. “I appreciate the efforts of Senators Baldwin, Collins, and others to address this concern, and heartily support their legislation.”

On Wednesday, the Senate voted 62-37 to move to a final vote on the Respect of Marriage Act. Twelve Republicans were among the 62 he supported that move. They included: Romney; Roy Blunt of Missouri; Richard Burr of North Carolina; Shelley Moore Capito of West Virginia; Susan Collins of Maine; Joni Ernst of Iowa; Cynthia Lummis of Wyoming; Lisa Murkowski of Alaska; Rob Portman of Ohio; Dan Sullivan of Alaska; Thom Tillis of North Carolina; and Todd Young of Indiana.