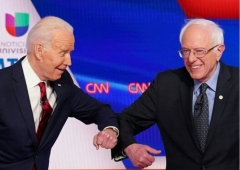 (CNSNews.com) - Sen. Bernie Sanders (I.-Vt.) declared on Saturday that the Senate must get rid of the filibuster.

“Republican Leader Mitch McConnell said it all,” Sanders said in his tweet. “‘What we have in the United States Senate is total unity from Susan Collins to Ted Cruz in opposition to what the new Biden administration is trying to do to this country.’

“That’s precisely why we must end the filibuster,” Sanders said.

To end debate on a piece of legislation and force it to come up for a vote, senators can invoke what is called “cloture.” However, this requires a three-fifths majority.

“Senate Rule XII, however, known as the cloture rule, enables Senators to end a filibuster on any debatable matter the Senate is considering,” explains the Congressional Research Service. “Sixteen Senators initiate this process by presenting a motion to end debate. In most circumstances, the Senate does not vote on this cloture motion until the second day of session after the motion is made. Then, it requires the votes of at least three-fifths of all Senators (normally 60 votes) to invoke cloture.”

“The primary effect of invoking cloture on most questions is to impose a maximum of 30 additional hours for considering that question,” says CRS. “This 3-hour period for consideration encompasses all time consumed by roll call votes, quorum calls, and other actions, as well as the time used for debate. Under cloture, as well, the only amendments Senators can offer are ones that are germane and were submitted in writing before the cloture vote took place.”