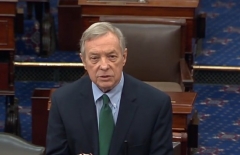 “Congress and our Nation marked the first anniversary of one of the darkest days in America history yesterday: the January 6 insurrection, the day American democracy was nearly lost,” said Durbin.

“That day, an embittered, defeated President Trump sent a murderous mob to attack this Capitol and overturn the election he had lost,” he said.

“I was honored to join my colleagues yesterday to speak to the bravery of the Capitol Police, the Washington, DC, Metropolitan Police, and the National Guard, who battled not only to defend this building but to defend our way of life and our government,” said Durbin. “Those defenders of democracy faced down violent extremists for hours. They endured vicious attacks with fists, chemical sprays, baseball bats, flagpoles, steel bars, and other weapons. It is because of their courageous sacrifice that our democracy survived.

“Five police officers who battled the mob on January 6 died over the following days, weeks, and months,” said Durbin. “Most of them continue to protect us, even as they heal from the wounds of that day.

“As these officers will tell you, January 6 was not a normal day for tourists in the Capitol, despite what Congressman Andrew Clyde, Republican of Georgia, claimed,” said Durbin. “And the threat of January 6 is not over.”