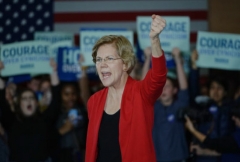 “I, Joseph R. Biden Jr., President of the United States of America, do hereby proclaim October 11, 2021, as Indigenous Peoples’ Day,” Biden said. “I call upon the people of the United States to observe this day with appropriate ceremonies and activities.  I also direct that the flag of the United States be displayed on all public buildings on the appointed day in honor of our diverse history and the Indigenous peoples who contribute to shaping this Nation.”

“On Indigenous Peoples’ Day, we honor America’s first inhabitants and the Tribal Nations that continue to thrive today,” said Biden. “I encourage everyone to celebrate and recognize the many Indigenous communities and cultures that make up our great country.”

In her tweet, Sen. Warren said: “I’m glad to stand with tribal nations and Native communities as we celebrate their remarkable contributions, cultures, and resilience on #IndigenousPeoplesDay. It’s time the federal government also honors its promises to Native peoples.”