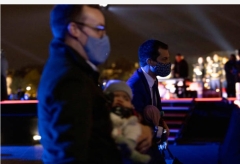 (CNSNews.com) - The text of the Respect for Marriage Act that will come up for a final vote in the Senate this week includes language to clarify that it does not require the federal government to recognize “marriages between more than 2 individuals” but only “marriages” between 2 individuals of the same sex.

Section 7 (b) of the bill carries the heading: “No Federal Recognition of Polygamous Marriages.”

This section says: “Nothing in this Act, or any amendment made by this Act, shall be construed to require or authorize Federal recognition of marriages between more than 2 individuals.”

(Screen capture of passage from the Respect for Marriage Act as printed the Congressional Record.)

The bill does not say that marriage is the union of one man and one women, but instead describes marriage as “between 2 individuals.”