U.S. Economy Shrinks for Second Quarter in a Row 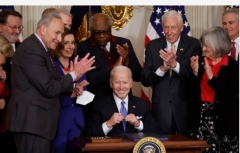 In the January-through-March period, real Gross Domestic Product (GDP) dropped by 1.6 percent, said BEA. In the April-through-June period, it dropped by 0.9 percent.

“Imports, which are a subtraction in the calculation of GDP, increased,” it said.