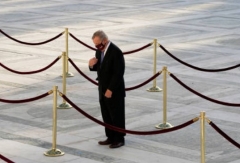 (CNSNews.com) -- When asked whether he will read all 2,702 pages of the infrastructure bill before voting on it, Senate Majority Whip Richard Durbin (D-Ill.) laughed and said, “Have you read the Bible cover-to-cover?”

At the U.S. Capitol on Wednesday, CNS News asked the senator, “Will you read all 2,702 pages of the infrastructure bill before voting on it?”

Senator Durbin did not answer the question directly, but laughed and said, “Have you read the Bible cover-to-cover?”

The House voted to pass its infrastructure bill on July 1. Should it pass in the Senate, it will be “the largest long-term investment in our infrastructure and competitiveness in nearly a century,” reads the White House statement.

While Senate Majority Leader Chuck Schumer (D-N.Y.) is determined to hold a vote on the $1.2 trillion dollar infrastructure bill before the Senate leaves for recess on Aug. 9, Senate Minority Leader Mitch McConnell and other Republicans are less enthusiastic about taking action on it.

Leader McConnell said on the Senate floor on Monday, “Our full consideration of this bill must not be choked off by any artificial timetable that our Democratic colleagues may have penciled out for political purposes.”