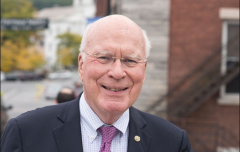 (CNS News) -- Although President Joe Biden's budget proposal racks up $14.5 trillion in deficits over the next 10 years, Vermont Senator Patrick Leahy (D) said "the only time we've balanced the budget" was "with a Democratic president, so I have hopes."

At the Capitol on Wednesday, CNS News asked Leahy, “President Biden has presented Congress with a budget that proposes running $14.5 trillion in deficits over the next decade. Will Congress ever balance the budget?”

Leahy said, “The only time we’ve balanced the budget since I’ve been here, it’s been with a democratic president, so I have hopes.”

“The biggest deficits were under Republican presidents,” he added. “Balanced it under President [Bill] Clinton, one of the more recent ones, and, of course, under President [Lyndon] Johnson. So, we’ll see.”

“The thing is, if our economy collapses because of COVID, don’t even think about what the budget’s going to be like, we’ll be in a disaster,” said the senator. “The most important thing is to bring the economy back, and that’s what he [Biden] is trying to do.”

As a follow-up, CNS News asked Sen. Leahy in what year will Congress balance the budget.

He said, “Let’s see how the economy goes. Certainly we don’t — it didn’t happen — after President Clinton balanced the budget, the next president was a Republican president who put in a huge tax cut, which just benefitted the wealthiest and added to the deficit.”

Under Biden's budget proposal, the federal government will continue to deficit spend (accumulate debt) for at least the next 10 years, with total borrowing hitting a combined $14.5 trillion in 2031.

The New York Times has reported, "President Biden would like the federal government to spend $6 trillion in the 2022 fiscal year, and for total spending to rise to $8.2 trillion by 2031. That would take the United States to its highest sustained levels of federal spending since World War II, while running deficits above $1.3 trillion through the next decade."  (Emphasis added.)