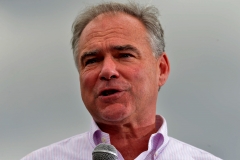 (CNSNews.com) -- When asked if it was a good thing that 42% of the babies born in America in 2020 were born on Medicaid, Sen. Tim Kaine (R- Va.) said he did not “have an opinion about whether it’s good or bad,” and added that Medicaid coverage should be extended to a year – instead of 90 days -- for new mothers.

At the Capitol on Thursday, CNSNews.com asked Sen. Kaine, “According to the CDC, 42% of the babies born in America in 2020 were born on Medicaid. Is that a good thing?”

The senator said, “It’s true. I think it’s slightly higher than that in Virginia, I mean it’s probably 45%? So, you know, I don’t have an opinion about whether it’s good or bad. It is the reality and it’s one of the reasons that I am strongly promoting if Medicaid should—Medicaid coverage should continue for moms for a year after childbirth rather than 90 days.”

“If we did that one thing, we would dramatically reduce maternal mortality, which would be very good,” said the senator.

Two weeks ago, the CDC released new data on births in 2020 listing the statistics of babies born on Medicaid, born to married and unmarried mothers, the race of the mothers, as well as other relevant information.

The percentage of babies who were born to unmarried women overall in 2020 increased 1% from the year prior to 40.5%.

The CDC also created tables that list the births of babies to unmarried mothers beginning in the 1940’s. The percentage at that time for all races was only 3.8% of unmarried women who gave birth. In 1999 it hit 33%.

“Authorized by Title XIX of the Social Security Act, Medicaid was signed into law in 1965 alongside Medicare. All states, the District of Columbia, and the U.S. territories have Medicaid programs designed to provide health coverage for low-income people,” the Medicaid.gov website says. “Although the Federal government establishes certain parameters for all states to follow, each state administers their Medicaid program differently, resulting in variations in Medicaid coverage across the country.”