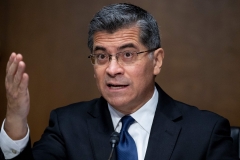 (CNS News) -- After the Senate voted (50-49) on Thursday to confirm Xavier Becerra as Secretary of the Department of Health and Human Services (HHS), pro-life leaders denounced the vote, stating that the confirmation is a “blow to all Americans who value religious liberty and the sanctity of life.”

Sen. Susan Collins (R-Me.) was the only Republican senator to vote in favor of Becerra.

In a statement, Kristen Day, executive director of Democrats For Life of America, said, “We need someone to lead HHS who values life at all stages. The nomination of an unqualified state AG [attorney general] serves the purpose of appeasing the abortion cultural warriors in the Democratic Party.”

Kristen Day, executive director of Democrats For Life of America. (The Federalist)

“However, It runs counter to the Biden Administration’s stated goal of healing divisions in the United States,” she said.

Dr. Grazie Pozo Christie, policy advisor for the Catholic Association, said in a statement, “Xavier Becerra’s confirmation to Secretary of the Department of Health and Human Services is a blow to all Americans who value religious liberty and the sanctity of life. Becerra has spent his career advancing radical, pro-abortion policies and persecuting those who disagree with him.”

“As a physician, I take very seriously conscience protections, and I am alarmed by Becerra’s treatment of the Little Sisters of the Poor whom he attacked for their beliefs about the sanctity of all human life,” said Dr. Christie. “If President Biden was serious about unity, he would have chosen a Secretary of HHS more in line with the majority of Americans who want to see greater restrictions on abortion.”

When Becerra was a member of Congress (1993-2017), he voted against the Partial-Birth Abortion Act. As the Susan B. Anthony List reported, “In a partial-birth abortion the child is delivered into the birth canal up to its shoulders and then killed through vacuuming out its brain and crushing its skull. Despite Becerra’s vote in opposition, the bill passed in 2003 and went on to be upheld by the Supreme Court in Gonzales v. Carhart in 2007.”

In 2015, Rep. Becerra (D-Calif.) voted against the Born-Alive Abortion Survivors Protect Act, which would have required medical staff to do all they could, including calling an ambulance, to save a baby that survives an abortion.

“The confirmation of Xavier Becerra as Secretary of the Department of Health and Human Services is alarming given the fact that he has spent his career expanding pro-abortion policies and persecuting pro-life groups and individuals,” said Jeanne Mancini, president of the March for Life.

“He has utilized his power as attorney general of California to punish groups like the Little Sisters of the Poor for their faith, as well as the journalists who exposed Planned Parenthood's trafficking in baby body parts,” said Mancini. “If his record is any indication, Becerra will weaponize the more than trillion-dollar budget of the Department of Health and Human Services to attack or disadvantage those with whom he disagrees, and advance unpopular pro-abortion policies.”

Jeanne Mancini, president of the March for Life. (Screenshot.)

“Pro-life Americans will be keeping a close eye on Becerra’s agenda and will continue to speak out in defense of women and the unborn,” added Mancini.

“The Biden-Harris administration has dropped all semblance of the ‘unity’ they once promised,” said Susan B. Anthony List President Marjorie Dannenfelser. “To carry out the administration’s extreme abortion goals, Senate Democrats have pushed through Xavier Becerra to lead the federal agency at the center of determining abortion policy. The agenda he promises to champion is deeply out of step with public opinion.”

“Becerra is infamous in the pro-life movement, well known for his record of attacking pro-life policies protecting unborn life, as well as assaulting the conscience rights of pro-life Americans,” said Dannenfelser. “President Biden could not have picked a more eager and enthusiastic partner to destroy pro-life policy and expand abortion on demand.”

Brain Burch, president of Catholic Vote, said in a statement, "Xavier Becerra's confirmation as Secretary of Health and Human Services poses a clear and present danger for Catholics and all people of faith. Given his record of aggressive hostility to free speech, health care freedom, and the traditional values of marriage, family, and the sanctity of life, Americans must be prepared for what is coming.”

“Becerra is a culture warrior and extreme left-wing ideologue who has repeatedly trampled on our most fundamental constitutional rights,” said Burch.  “We can only assume Becerra's clear contempt for religious freedom will continue in his new role. It is only a matter of time before he targets the Little Sisters of the Poor again, strips doctors and religious institutions of conscience rights, and mandates other harmful policies that assault core freedoms cherished by people of faith.”

“Every Senator who voted in favor of this confirmation is now responsible for the radical policies likely to come out of HHS during Becerra's tenure -- and voters must hold them accountable,” concluded Burch.