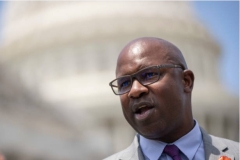 (CNS News) -- When asked whether the legal age to drink alcohol, 21, should be lowered to 18, which is the legal age to purchase a rifle, such as the AR-15, House Rep. Jamaal Bowman (D-N.Y.) said no, and added that the age to buy a rifle should be raised to 25.

He then said: "[A]nd I think they should actually be banned, personally."

At the U.S. Capitol on June 9, CNS News asked Rep. Bowman, “Under federal law, a person can buy a rifle at 18, but they cannot buy alcohol until they’re 21. Do you think the drinking age should be lowered to 18?”

The congressman replied, "No, I think the law to buy a rifle should be raised to 25, and I think they should actually be banned, personally."

On June 8, the House of Representatives voted to pass the “Protecting Our Kids Act,” which would raise the federal minimum age to buy rifles and shotguns to 21, barring a few exceptions, and also regulate gun trafficking, “ghost guns,” gun storage, and bump stocks.

The legislation is expected to run into hurdles in the Senate, although there are reports that at least 10 Republicans have agreed to several measures being pushed by the Democrats, potentially giving them a filibuster-proof majority to pass more gun control laws.