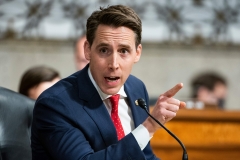 (CNSNews.com) - Sen. Josh Hawley (R-Mo.) said on Wednesday that he opposes the unamended Equality Act, which passed the Democrat-controlled House last year, because, among other things, "it would force people of faith, doctors, others to perform abortions."

The Equality Acts, says an official summary, "prohibits discrimination based on sex, sexual orientation, and gender identity in a wide variety of areas including public accommodations and facilities, education, federal funding, employment, housing, credit, and the jury system. Specifically, the bill defines and includes sex, sexual orientation, and gender identity among the prohibited categories of discrimination or segregation."

“The bill prohibits an individual from being denied access to a shared facility, including a restroom, a locker room, and a dressing room, that is in accordance with the individual's gender identity," says the summary.

At the Capitol, CNS News asked Hawley: “When the House Judiciary Committee considered the Equality Act it rejected an amendment that said the act would not require biological females to face biological males in sports competition. Should biological males who say they identify as females be allowed to play girls’ sports?”

The senator responded: “Well, you know the Equality Act, unamended, as you just alluded to it, came to us on the Senate floor last week, on I think Thursday, and Senator Booker and Senator Merkley asked to pass it by unanimous consent, which means without a vote and any further debate.”

“So, I objected to that,” said Hawley, “and I objected to passing the act without the kind of amendments that you’ve identified and frankly without protections for religious liberty or protections for--one of my major concerns with the Equality Act as it is currently written, as it came to us on the Senate floor last week, is that it would force people of faith, doctors, others to perform abortions; hospitals, that are currently faith-based hospitals to allow the performance of abortions.”

The Equality Act passed the House of Representatives in May 2019 by a vote of 236-173. Every House Democrat voted for the bill, as well as eight Republicans. The legislation went to the Senate floor for discussion on Thursday, June 18.

The bill also "prohibits the Religious Freedom Restoration Act of 1993 from providing a claim, defense, or basis for challenging such protections.”

“H.R. 5, this bill here, would supersede existing restrictions on abortion, including funding, including health and safety standards, and other regulations that the States have passed,” he said.

“It would force faith-based adoption agencies, some of which have been helping birth mothers find a safe and loving and permanent home for more than 100 years--it would force them out of business,” Hawley said.

“It would coerce those who don't want to speak or who hold different beliefs into adopting this set of practices and principles and beliefs at work--these doctors, these nurses, and these faith-based agencies,” he said.