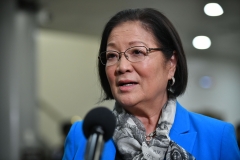 (CNSNews.com) - When asked how many trillion dollars should be in the new COVID relief bill – Republicans want $1 trillion and Democrats want $3.4 trillion – left-wing Senator Mazie Hirono (D-Hawaii) said that $1 trillion “is not enough.”

At the U.S. Capitol on Wednesday, CNS News asked Sen. Hirono, “Nancy Pelosi has said the HEALS Act, $1 trillion, is not spending enough. She has proposed the $3.4 trillion HEROES Act. How many trillions should be in an additional COVID relief bill?”

The senator responded, “$1 trillion is not enough to take care of the millions of people who are unemployed, the families who will probably get evicted or foreclosed upon.”

“We should be very much concerned about what is going to happen to all these families and people in our communities,” Hirono continued, “whatever it takes.”

“Because the Republicans have no problem in sending $1.5 trillion in tax cuts to the richest 1% of people and corporations in our country,” she added.  “Now they are saying ‘Oh my goodness we can’t add to the deficit.’ Give me a break. We have to take care of our people.”

Two bills are currently under consideration in the Congress. House Speaker Pelosi (D-Calif.) has proposed the $3.4 trillion HEROES act, or “Health and Economic Recovery Omnibus Emergency Solutions.” The HEROES act includes stimulus checks, PPP loans, and expanded Medicare and Medicaid among other provisions, according to a congressional summary.

Pelosi gave a summary of the bill on May 15: “The Congress must honor its responsibility to the American people to lessen the blow of the coronavirus by making the same serious investment of the HEROES Act to our state, local, tribal and territorial governments.”

“The plan that we are voting on today will make a tremendous difference not only in the budgets in the states, but in the lives of the American people,” she said.

“Getting kids back in school, getting workers back to work, and winning the health care fight against the virus,” are the main goals of the bill, according to McConnell.