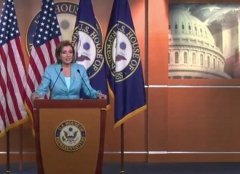 (CNSNews.com) - House Speaker Nancy Pelosi (D.-Calif.) did not directly respond to a question from CNSNews.com—predicated on the upcoming Supreme Court case of Dobbs v. Jackson Women’s Health Organization—on whether a 15-week-old unborn baby is a human being.

“Let me just say that I’m a big supporter of Roe vs. Wade,” Pelosi said.

Here is the full exchange between CNSNews.com and Pelosi:

CNSNews.com: “Thank you Madam Speaker. I am with CNSNews. The Supreme Court this fall will review a Mississippi law that bans most abortions after 15 weeks of pregnancy. Is an unborn baby at 15 weeks a human being?”

Pelosi: “Let me just say that I’m a big supporter of Roe vs. Wade. I am a mother of five children in six years. I think I have some standing on this issue as to respecting a woman’s right to choose.”

CNSnews.com: “Is it a human being?”

Without answering that question, Pelosi turned and pointed to another reporter, who she recognized by saying: “Yes. Yes, ma’am.”

In its petition asking the Supreme Court not to take up this case, Jackson Women’s Health Organization described the question at issue as follows:

“Whether the Fifth Circuit correctly concluded that a Mississippi statute banning abortion after 15 weeks—months before viability—is unconstitutional under nearly fifty years of precedent holding that it is unconstitutional to ban abortion before viability, including Planned Parenthood of Southeastern Penn-sylvania v. Casey, 505 U.S. 833 (1992), and Whole Woman’s Health v. Hellerstedt, 136 S. Ct. 2292 (2016).”