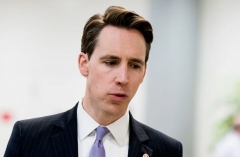 (CNS News) – On Tuesday, Sen. Josh Hawley (R-Mo.) introduced a resolution “condemning hate and violence against Jews,” specifically from elected officials and the media who help to inspire much of the violence, according to the senator. This comes in the wake of surges of anti-Semitic violence in this country and in Europe.

The resolution also seeks to “denounce anti-Israel rhetoric” and reaffirm that Jews deserve both dignity and respect.

“The sickening rise in anti-Semitic attacks in the United States and around the world must end, along with the hateful anti-Israel rhetoric from politicians and the media that inspires the violence,” said Hawley.

MSNBC published an article describing Israel’s treatment of the Palestinians as “ethnic cleansing.” Many other media outlets have painted the Israelis as the bad guys in the conflict.

The ADL also reportedly found 17,000 tweets containing the phrase “Hitler was right” or similar phrases in the days following the beginning of the conflict.

Hawley’s resolution notes that, “pro-Palestinian protestors threatened, shoved, and threw fireworks at bystanders in the Diamond District of Midtown Manhattan, an area with many Jewish-owned businesses”; “a Member of Congress tweeted, ‘The Israeli military’s occupation continues. The blockade continues. The ethnic cleansing continues’”; “a Member of Congress described Israel in a tweet as an ‘apartheid state’”; and “convoys of trucks bearing Palestinian flags drove through London shouting through loudspeakers: “F*** the Jews,” “F*** their mothers,” “F*** their daughters,” and “Rape their daughters.”

While many in the west are still uncomfortable calling Israel an Apartheid state, this Israeli man was saying it four years ago. It’s time to get on the right side of history.

According to Hawley’s press office, the resolution is supported by both the Republican Jewish Coalition and the Family Research Council.