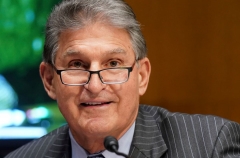 (CNS News) -- When asked whether voters should be required to show ID at the polls, Sen. Joe Manchin (D-W.Va.) said, "Absolutely, always ID." Today, the Senate is expected to hold a procedural vote on S.1, the For the People Act, legislation that would eviscerate voter ID laws in 36 states.

At the U.S. Capitol on Tuesday, CNS News asked Senator Manchin, “Do you think that states should require an ID to buy alcohol?”

He did not respond, and CNS News then asked, “What about to vote?”

Manchin’s support for voter ID, however, is less strict than requiring a photo ID. The senator supports presenting alternative ID, if necessary, such as a utility bill with a name and address.

Tuesday afternoon at a press conference, Sen. Chuck Schumer (D-N.Y.) revealed that all 50 Democrats, including Manchin, would vote yes to move forward with debate on S.1, the “For the People Act.”

Manchin has said that he opposes the legislation as it is currently written and that a bill this sweeping should move forward with bipartisan support.

Sen. Mitch McConnell (R-Ky.) made it clear at a June 17 press conference that the Senate GOP would not budge in opposition to the bill, which he described as “an effort by the federal government to take over the way we conduct elections in this country.”

“It is a solution in search of a problem,” he added.

S.1, the For the People Act would overhaul state elections, centralizing power in the federal government. The legislation would also disallow states from requiring a photo ID to vote.

The Wall Street Journal has reported, “A study by economist John Lott finds that 46 of 47 European countries require government-issued photo ID to vote. The exception is Great Britain (although not Northern Ireland).”