Sen. Peters: Mandating COVID Vaccine Is ‘Up to the School Districts’ 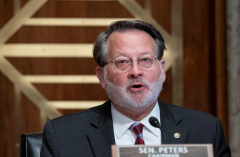 (CNS News.com) -- When asked whether public schools and colleges should be allowed to mandate that their students receive the COVID vaccine, Sen. Gary Peters (D-Mich.) said, “It’s a local decision.”

At the U.S. Capitol on Tuesday, CNS News asked Peters, “Do you think that public schools and colleges should be able to mandate that students be vaccinated for Covid-19?”

CNS News prompted the senator further regarding public universities and he said, “That’s going to be up to the states.”

A number of universities have announced their plans to require student vaccinations for the upcoming school year, including Virginia Tech and The University of Colorado. They do allow for exemptions based on medical condition or religion.

However, according to Virginia Tech’s Frequently Asked Questions, the religious exemption form must be notarized and Virginia’s state health commissioner reserves the right to exclude you from university activity if there are any perceived emergencies.

The Centers for Disease Control and Prevention advises that K-12 schools highly encourage vaccinations, yet does not suggest mandates. They also note that, “Many schools serve children under the age of 12 who are not eligible for vaccination at this time,” and highlight alternate prevention strategies.

Julia Johnson: “Do you think that public schools and colleges should be able to mandate that students be vaccinated for Covid-19?”

Sen. Gary Peters: “Where are you from?”

Johnson: “And what about public universities?”

Peters: “That’s going to be up to the states.”

Johnson: “All right. Thank you.”