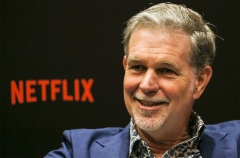 (CNS News) -- In a joint letter to Netflix CEO Reed Hastings, the attorneys general for Ohio, Louisiana, Texas, and Florida call on him to cease streaming the movie “Cuties” because of its “hypersexualization” of children. They also state that the film “whets the appetites of those who wish to harm our children in the most unimaginable ways.”

“I vehemently oppose the continued streaming of the movie ‘Cuties’ on Netflix, and request that you voluntarily remove it from your service due to the great harm it causes to our children,” state Attorneys General Dave Yost (Ohio), Ken Paxton (Texas), Jeff Landry (Louisiana), and Ashley Moody (Florida) said in their Sept. 14 letter to Hastings.

“Cuties” is a coming-of-age story about 11-year-old Amy, a French Senegalese girl who rebels from her conservative, Muslim household after her father decides to take a second wife. Amy seeks out the favor of a provocative dance clique who blindly emulate the hyper-sexualized culture they see glorified on social media.

Amy’s rebellious behavior leads her to post a pornographic photo of herself to social media and train her clique how to perform provocative dance moves she learned online. At the end of the film, Amy breaks down on stage while performing to a booing audience and reverts to a more modest lifestyle.

Director Maïmouna Doucouré claims “Cuties” is meant to critique both the overly restrictive Muslim culture and the oversexualized Western culture that leaves young girls few options. “We are able to see oppression of women in other cultures,” Doucouré says, “But my question is isn’t the objectification of a woman’s body that we often see in our Western culture not another kind of oppression?”

“In this era where we are fighting a seemingly never-ending battle against human trafficking, this film is counterproductive,” state the attorneys general.

Describing the sexualization of the children in the movie, the  attorneys general write, “This film contains the gratuitous exposure of a young girl’s breast; it repeatedly shows children using their bodies in a sexual manner to get themselves out of trouble; it graphically focuses on the clothed genitalia of children; and it shows the creation and publication of child pornography.”

“Repeated images of eleven-year old children gyrating, ‘twerking,’ and simulating sex in tight, skimpy clothes simply serves as fodder for those with criminal imaginations, serving to normalize the view that children are sexual beings,” reads the letter.

“It whets the appetites of those who wish to harm our children in the most unimaginable ways—ways I have had to prosecute,” say Yost and the other state prosecutors.

They continue, “The sexualization of our children leads traffickers to view them as commodities that can be sold, over and over again. Traffickers often step in when children face vulnerabilities similar to those of the protagonist in ‘Cuties.’”

“We should be teaching our children about healthy conversations and safe spaces to deal with their vulnerabilities, not normalizing hypersexualization as a way to become ‘popular’ and a means to work through the issues they might face in their everyday lives,” reads the letter. “In short, this film does immeasurable damage to all of us fighting to keep our children safe.”

Since Netflix started streaming “Cuties” last week, an online petition to have the film removed from Netflix has garnered more than 665,800 signatures.  Last August, “#CancelNetflix” was trending on Twitter because of Netflix’s advertising material, which depicted the young actresses posing provocatively.

In the ad, Netflix stated, “Amy, 11, becomes fascinated with a twerking dance crew. Hoping to join them, she starts to explore her femininity, defying her family’s traditions.” Not long thereafter, following much outrage, Netflix said, “We're deeply sorry for the inappropriate artwork that we used for Mignonnes/Cuties. It was not OK, nor was it representative of this French film which won an award at Sundance. We’ve now updated the pictures and description.”

On Sept. 14, Newsweek reported that Netflix shares had dropped 1.3% “following the streaming platform’s controversial release of the film ‘Cuties.’” The opening stock price on Monday was $480.62, which is down from last week’s average of $529.22.

Publications such as The New Yorker and Vice have defended the movie, claiming attacks on the film stemmed from the “far right,” and that the film’s storyline and purpose vindicated the sexual imagery. The New Yorker featured a story calling ‘Cuties’ “Extraordinary.”

Vice writer Almaz Ohene said, “The only thing controversial about ‘Cuties’ is how badly Netflix marketed it.”

“There are some scenes that are intentionally provocative, however, and one in particular that feels unnecessarily eroticised,” wrote Ohene. “The montage features close-ups of their young bodies, skin-tight clothing and highly sexualised dance moves. This scene is designed to make viewers uneasy, but knowing that the actors themselves are very young is somewhat concerning.”

On Fox News’ Sunday Morning Futures, Senator Ted Cruz (R-Texas) labelled “Cuties” as “pornographic,” and stated, “If you have child pornography, if you have kids engaged in sexual activities, if you produce it, if you distribute it, you face criminal penalties. I guarantee you every pedophile in America is going to watch this movie.”

Sen. Cruz later tweeted that he sent a letter to Attorney General William Bar to investigate whether any federal laws concerning production and distribution of child pornography were violated.