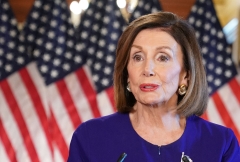 (CNS News) -- At her weekly press conference today, Speaker of the House Nancy Pelosi (D-Calif.) said, “We’re not going to negotiate a woman’s right to choose.”

On Thursday, a reporter asked Speaker Pelosi, “Congresswoman Chu’s bill has passed the House before, but it continues to fail in the Senate. Are there any discussions between House leadership and Senate leadership for some sort of negotiations?”

Pelosi replied, “What do you mean negotiations? What do you want to negotiate?”

The reporter followed-up, “Some senators have said that this bill, Senators Murkowski and Collins, for instance, have said that Congresswoman Chu’s bill goes too far.”

“We’re not going to negotiate a woman’s right to choose,” said Pelosi.  “Senator Murkowski [R-Alaska] and Senator Collins [R-Me.] may have their view, but it is not a view that is one about a woman’s having the right to decide. So, we’re not negotiating that, no.”

Rep. Judy Chu (D-Calif.) introduced H.R.8296, the Women’s Health Protection Act of 2022 on July 7. The bill prohibits the federal government from placing restrictions on the provision of and access to abortion.

According to the bill’s summary, it says, “Specifically, governments may not limit a provider's ability to prescribe certain drugs, offer abortion services via telemedicine, or immediately provide abortion services when the provider determines a delay risks the patient's health.”

The text of the bill says, “Abortion services are essential to health care, and access to those services is central to people’s ability to participate equally in the economic and social life of the United States.”

A woman undergoes an abortion, killing her own child. (Getty Images)

In Sen. Murkowski’s press release in May 2022, she said, “The Women’s Health Protection Act goes well beyond the precedent established in Roe and Casey. It does not include the Hyde amendment, which prohibits taxpayer dollars from being spent on abortions -- and has been the law almost as long as Roe.”

“It does not include conscience protections for healthcare providers that refuse to perform abortions based on religious beliefs,” said Murkowski. “It explicitly overrides the Religious Freedom Restoration Act for the first time. It also allows late-term abortions without any notable restrictions.”