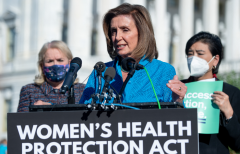 (CNS News) -- The Democrat-controlled House of Representatives passed a bill on Friday that would essentially override all state laws that limit abortion, now and in the future, and make abortion legal across the board, even up to the moment of birth. The legislation passed on a largely party-line vote, 218 to 211.

The legislation, HR 3755, is entitled the “Women’s Health Protection Act of 2021” (WHPA). The purpose of the bill is “to permit health care providers to provide abortion services without” certain “limitations or requirements.”

“The bill is beyond extreme -- invalidating all state laws limiting the deadly procedure -- even popular late term abortion laws -- as well as doing away with health and safety regulations designed to protect women,” said Jeanne Mancini, president of the March for Life, in a statement.

“Future state pro-life legislation would be disallowed,” she said.  “It would also force health care workers to participate in abortions and compel taxpayers to fund them. If Joe Biden, Nancy Pelosi, and their allies get their way, the United States will soon be indistinguishable from North Korea and China on the human rights issue of abortion."

House Rep. Judy Chu (D-Calif.), who first introduced the bill back in 2013, said in a statement, "We have had Roe v. Wade in effect for 50 years. We have been protected by that. It wasn't until 2011, [when] we saw states pass these medically unnecessary laws — which dictated the width of clinic doors and forced doctors to have medically unnecessary admitting privileges or where they required an ultrasound — that we saw that we just have to get the Women's Health Protection Act in place, so that ... we weren't playing whack-a-mole with each of these states and their laws."

The WHPA restricts states from “mitigating abortion-related health risks,” and prevents states from enforcing safety measures regarding chemical abortions, which have a complication rate four times that of surgical abortion, according to the Heritage Foundation wrote.

Because of the restrictions the bill places on medical facilities to actually educate patients on the issues, complications, and problems associated with abortion, Marjorie Dannenfelser --President of the Susan B. Anthony List -- argued that it is not healthcare.

“It’s not a sincere desire to promote women’s health, it’s not even a sincere desire to get a bill over the line, it’s a messaging document in a moment when the nation is moving in the exact opposite direction,” Dannenfelser said on a phone press conference Friday.

“They’re persevering [abortions] in this radical bill that absolutely contradicts the will of the people of the United States” Dannenfelser said.

A Harvard CAPS/Harris poll, an online survey of 1,295 registered voters from May 2019, found that only 6% of Americans support abortion up until birth.

Catholic Bishop Michael Burbridge, head of the Archdiocese of Arlington, Va., agreed that the bill goes against the views and opinions of Americans at large.

“The Act thwarts public opinion by eliminating widely supported pro-life laws at every level of government,” Burbridge said in a statement. “It would force Americans to pay for abortions here and abroad with their tax dollars.”

Burbridge urged the Virginia lawmakers who supported the WHPA to turn back and support legislation that protects mothers and children alike.

“Let us be clear: Abortion harms women and ends the life of a child; it is not health care, and it protects no one,” said the bishop. “Health and protection are about healing, defending, and saving lives, not destroying them.”

House Speaker Nancy Pelosi (D-Calif.), a Catholic who helped push the bill through the House and win its passage, said, “We’ve long been supporters of Roe vs. Wade. We haven’t been able to codify it because we never had a Democratic, pro-choice majority [in the House] with a Democratic president -- and now we do.”

Although the legislation passed in the U.S. House, it would need 60 votes to pass in the Senate, which is unlikely to happen given that the Senate is split, 50-50.