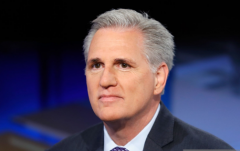 (CNS News) -- When asked if President Joe Biden or House Speaker Nancy Pelosi (D-Calif.) would ever balance the budget, House Minority Leader Kevin McCarthy (R-Calif.) said, “Every great society has collapsed when they’ve overextended themselves, and this is exactly the path the Democrats have put us on.”

At the U.S. Capitol on Thursday, CNS News asked the congressman, “The federal deficit through the first 11 months of this fiscal year was $2.7 trillion and the federal debt is now over $28 trillion -- will President Biden or Speaker Pelosi ever balance the budget?”

McCarthy responded, “Not if they continue to add another $5 trillion. Our GDP is about 23 [trillion dollars], you’ve got a real challenge.”

“Every great society has collapsed when they’ve overextended themselves, and this is exactly the path the Democrats have put us on,” said McCarthy. “The inflation they have created with their spending, when first coming into office, continues to contribute to this and the harm it will cause to businesses and growth and for future generations of Americans.”

“They’re putting us on a path to do a great deal of damage,” he added. “I remember listening to, a number of years ago, the joint chiefs of staff say the greatest threat to our nation wasn’t a foreign enemy, it was the debt, and the Democrats have done nothing but add to it.”

Despite the deficit and the debt, House Speaker Nancy Pelosi (D-Calif.) pushed the $3.5 trillion spending blueprint through the House in late August, reported the Wall Street Journal. The Democrat victory was a party-line vote, 220-212.

Due to the bill’s passing, the Democrats are now in the reconciliation process, which allows them to pass a “broad package of healthcare, education and climate provisions in the Senate without GOP support, so long as all 50 Democratic senators back it” wrote the Journal.

The continuing resolution passed this week is separate legislation and will fund the government only through Dec. 3. The $3.5 trillion package is still being hashed-out in the Senate, although approximately $1 trillion for infrastructure has been agreed upon.