Sen. Cassidy: Biden ‘Has No Interest in Securing the Southern Border’ 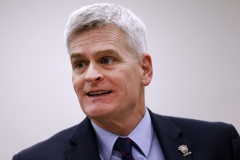 At the U.S. Capitol on Tuesday, CNS News asked the senator, “Will President Biden secure the southern border?”

Cassidy responded, “No, he has no interest in securing the southern border. No real interest. I say that because none of his policies indicate that he is at all interested. We have children being trafficked from all over the world to come here. It’s terrible.”