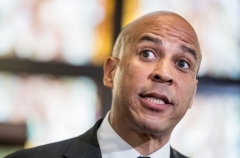 At the U.S. Capitol on Thursday, CNSNews.com asked the senator: “Will President Biden secure the southern border?”

In a follow-up question, CNSNews.com asked, “Do you know if he’s making any efforts to do so now?”

Booker, who serves on the Senate Judiciary and Foreign Relations committees, responded, “Again, you can look at the news and see what he’s doing. That’s a question you might want to ask him.”

In the first week of his presidency, Biden revoked former President Donald Trump’s executive order that focused on securing the southern border to prevent illegal immigration. This included halting construction of the border wall Trump was building.