Sen. Durbin: ‘We’re in The Process’ of Securing the Southern Border 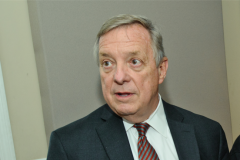 Durbin replied, “We’re in the process of doing that now.”