Sen. Tillis: Biden ‘Has Made Matters Worse’ at the Southern Border 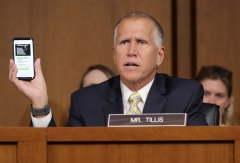 (CNS News) -- When asked if President Joe Biden would secure the southern border, Senator Thom Tillis (R-N.C.) said, “No,” and added that Biden has “made matters worse.”

“He has actually even hinted towards using funds to decommission some of the structures that are down there,” Tillis continued. “So he’s taking it in the opposite direction.”

“He’s allowing the Department of Justice to negotiate a settlement that will send a message to people in the triangle that if you come here, and you’re not handled properly, you can get a $450,000 payout. That’s not a safe thing to do for the people who are taking the dangerous trip.”