Sen. Tillis: ‘We Have to Do Everything We Can to Protect the Life of the Unborn’ 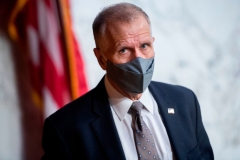 (CNSNews.com) - When asked if he believes an unborn baby with a beating heart has the right to life, Sen. Thom Tillis (R-N.C.) said, “We have to do everything we can to protect the life of the unborn.”

At the U.S. Capitol on Thursday, CNSNews.com asked the senator, “Does an unborn baby with a beating heart have the God-given right to life?”

Tillis responded, “My record on life is pretty well recorded during my time as speaker of the House [of the North Carolina House of Representatives]. I think we have to do everything we can to protect the life of the unborn.”

“We have been consistent in our position and reiterate that it would be a calamity if the important and life-affirming provisions in this bill were accompanied by provisions facilitating and funding the destruction of unborn human life,” the Bishops wrote. “No proposal to support individuals needing affordable health care coverage should compel Americans to pay for the destruction of human life through their tax dollars.”