Abbott: Biden Spending Millions to Secure Borders of Other Countries, But Won’t Secure Our Own Border 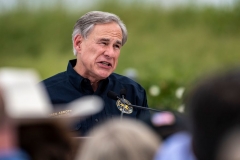 Texas Governor Greg Abbott speaks during a visit to the border wall near Pharr, Texas on June 30, 2021. (Photo by SERGIO FLORES/AFP via Getty Images)

(CNSNews.com) – Texas Gov. Greg Abbott said Friday that President Joe Biden is spending millions and maybe billions in taxpayer dollars to secure the borders of other countries like protecting Ukraine from Russian invasion but won’t deploy the resources necessary to secure the U.S. border with Mexico.

“You probably have reported on the lawlessness that we've seen in cities like San Francisco and Los Angeles and Portland and Seattle, Minneapolis, Chicago, New York City where they have de-fund the police and have criminals who are completely disregarding law enforcement. That attitude starts at the top,” Abbott told Fox Business’s “Mornings with Maria Bartiromo.”

“It starts with the president and when you have a president of the United States who himself is ignoring the law, refusing to enforce the law, allowing criminals to break that law, that goes down into the entire system, and that's why when Biden does not enforce the border security laws, when Biden allows people in the country illegally, willingly and telling the public that people get to roam around illegally,” he said.

“When Biden is involved in secretly transporting people that they apprehend down here and they drop off in New York state, people see that, and they know that's lawlessness, and I tell you what, there's an uprising in the attitude of Americans about this anger, and the lid’s about to blow the top, and unless and until the president himself is enforcing the rule of law and that includes the immigration laws passed by Congress that exist right now,” the governor said.

When asked why the Biden administration is secretly transporting single adult male migrants into the interior of the United States, instead of deporting them as Title 42 calls for, Abbott said, “They are doing it secretly in part so the public will not see what’s going and will not be as angry as they obviously would be. I think another reason why they’re doing it secretly is because it’s in violation of federal law, and it also is in violation of a court order here in Texas.

Abbott said that Biden needs to take accountability for his handling of the border and DHS Secretary Alejandro Mayorkas specifically.

“I tell you where accountability needs to begin. So there's the president and the Secretary Mayorkas, and I saw calls already earlier this week by members of the U.S. House of Representatives calling for the impeachment of Mayorkas,” the governor said.

Abbott said that Biden is allowing people to cross the border by reducing the number of Border Patrol Agents deployed to the border.

“Texas as a state is deploying more resources in the border than the United States of America as a country. Texas taxpayers alone in just in the next two years, we are spending $3 billion to secure our border. I think that's for more than what the federal government is spending here in Texas or here in the United States,” he said.

“Why is it the states that are having to step up and do the job to secure the border? I’ll answer the question, because Biden wants open borders. His party wants open borders, which is why no one in leadership positions in Washington, D.C., are doing anything to hold the president accountable,” the governor said.
Biden campaigned on open borders and so did Texas gubernatorial candidate, the governor pointed out.

“Why do they have the ideology of opening our border to people from more than 150 countries across the world, I have no idea. However, what I do know that it's been reckless, dangerous and deadly, not just with fentanyl drugs, but with people killed in this region, people's ranches being ripped apart, people's neighborhoods being disturbed. There are people in this area,” Abbott said.

Abbott said that O’Rourke complained about him trying to secure the border.

“So he's living up to the open-border policies that he campaigned on when he ran for president. Imagine what Texas will be like if we had Open Border Beto working along the side of Open Border Biden. It would be catastrophic, and that's why so many Texans, including historically Democrats in this region in South Texas supporting me, because they know I am the only one who’s going to protect them to keep them safe from these crazy open border policies,” he said.

On fentanyl, the governor said that enough fentanyl was seized by Texas law enforcement over the past year “to kill every man, woman and child in Texas, California, New York, Illinois and Florida combined.” Also, among those aged 18 to 45 this past year, “more people died of fentanyl than from COVID, than from car wrecks, than from cancer.”

“This is deadly, and we have a president who is allowing it to continue to come across the border, coming from China through Mexico to the United States, and it is Texas law enforcement that's having to step up and do it. The reason why Texas law enforcement is doing it is because Biden does not provide the adequate number of Border patrol whose sworn job it is to secure our border. Instead, they are just processing people who are coming across the border,” he said.

“Along those lines of potentially killing people off, the audience needs to know that a deadly dose of fentanyl is 2 milligrams. It’s smaller than two grains of salt, and before the end of this year, there will be more than enough fentanyl seized to kill all Americans, and so this is an existential threat to the United States,” Abbott said.

“It’s a national security-based issue especially the fact that it's coming from China. There are countless ways that this could be given to people that would kill so many Americans. The president has to stop sitting in his bedroom and get out and do something about this,” the governor said.