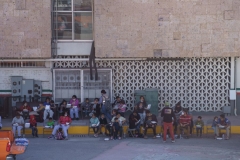 Migrants that crossed into the United States in the Rio Grande Valley and were flown to El Paso, Texas, rest at the Instituto Nacional de Migracion after being expelled to Mexico in Ciudad Juarez on April 6, 2021. (Photo by PAUL RATJE/AFP via Getty Images)

(CNSNews.com) - Acting CBP Commissioner Troy Miller said Wednesday that Border Patrol agents who encountered migrants in the Texas Rio Grande Valley have stopped giving out notice to appear citations, instead telling them to report to an ICE location within 60 days.

During a House Appropriations Subcommittee on Homeland Security hearing, Rep. Lucille Roybal-Allard (D-Calif.) asked Miller about CBP using “prosecutorial discretion to include the issuance of notices to report to ICE often known as RTI or an I-385 to certain migrant families in the RGV sector of Texas due to severe overcrowding in CBP facilities.”

“This began at a time when CBP had thousands of unaccompanied children in its custody and was also having to manage the impact of COVID-19. As CBP has worked with HHS to reduce the number of children in CBP custody, the number of such notices issued has gone down significantly,” the congresswoman said.

Roybal-Allard also expressed her displeasure with the term “catch and release,” saying she considers it “extremely disrespectful to migrants.”

“Notice to report to ICE has unfortunately been referred to as catch and release, which I have always found to be extremely disrespectful to migrants, most of whom are fleeing desperate conditions. I believe that no one should be using a fishing term to refer to human beings,” she said.

“Mr. Miller, can you elaborate on the rationale for issuing such notices, including the impact of changes in ICE operations and describe how you have worked to introduce more efficiency and accountability into the process?” the congresswoman said.

Miller responding, saying, “As you indicate, Notice to Report was initiated in the Rio Grande Valley and only in the Rio Grande Valley on March 19, 2021. Let me be clear, this is not a decision we’ve made lightly, but it was necessary as you pointed out given the capacity in our facilities and the need to decompress our facilities to keep not only folks in our custody safe but to keep our agents and officers safe.

“The surge of family units began on RGV on January 23 when Tamaulipas stopped taking back Northern Triangle families with tender age children under the age of seven. The situation on the ground on March 19th, we encountered 2,439 migrants in between the ports of entry in RGB alone,” the acting commissioner said.

“We had over 2,600 unaccompanied children of which 1943 unaccompanied children were held over 72 hours in our soft-sided facility. Pre-COVID, the capacity of our soft-sided facility was 1,000. What we did before initiating our notice to report as we moved 470 agents to the southern border, we set up virtual processing. We increased overtime for our Border Patrol agents,” he said.

“We moved some of the migrants for processing laterally from RGV to other sectors. The DHS volunteer force was activated. HHS and ICE personnel were deployed to our facility in Donna. The notice to report process cuts the paperwork in half, but let me clear up some misconceptions about the notice to report,” Miller said.

“Agents perform the same national security and border security checks they do as they would with notice to appear. They will collect biometrics and facial recognition or facial for the I-385 when they complete the I-213. The migrants are also given a G-56, which tells them that they must report to an ICE location within 60 days,” he continued.

“This is essentially the same process that we perform during the NTA – same checks, collecting the same biometric information,” the acting commissioner explained.

“Let me correct a common misrepresentation. Currently, DOJ time and date to determine in the NTA, the time and date is marked as to be determined, so we are not issuing a court date on an NTA today because of DOJ not having a non-detain docket,” Miller said.

The acting commissioner described the current process as more streamlined.

“We are filling out five less forms, cutting the time in half, and the reason this continues in RGV as you mentioned to a limited extent is we continue to see about 1700 migrants a day with a greater percentage of family units in RGV – 41 percent versus 25 percent nationally - and a greater number of UCs (unaccompanied children) – 14 percent versus 8 percent nationally,” he said.

“What we are doing to fix this, we are working with the DHS CIO (chief information officer), ICE, CIS, EOIR to streamline and automate a file process, Miller concluded.