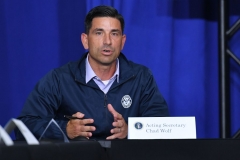 (CNSNews.com) - Acting Homeland Security Secretary Chad Wolf resigned Monday, citing the mob attack on the U.S. Capitol as his reason for stepping down.

“Effective at 11:59 p.m. today, I am stepping down as your Acting Secretary. I am saddened to take this step, as it was my intention to serve the Department until the end of this Administration. Unfortunately, this action is warranted by recent events, including the ongoing and meritless court rulings regarding the validity of my authority as Acting Secretary,” he wrote.

“These events and concerns increasingly serve to divert attention and resources away from the important work of the Department in this critical time of a transition of power,” Wolf added.

He said that he made his decision by asking himself what was in the best interest of the department.

“Decisions over the past several years have not been easy. Reforming broken systems or questioning long held beliefs is not for the faint of heart. But our job requires asking difficult questions and making the hard decisions. The American people deserve nothing less,” Wolf wrote.

Days prior to Wolf’s resignation, President Trump withdrew his name from consideration to become the permanent head of the agency. The announcement came an hour after Wolf called on the president and elected officials to “strongly condemn” the U.S. Capitol riots.

"What transpired yesterday was a tragic and sickening," Wolf said in a statement last wee. "While I have consistently condemned political violence on both sides of the aisle, specifically violence directed at law enforcement, we now see some supporters of the President using violence as a means to achieve political ends. This is unacceptable."

"These violent actions are unconscionable, and I implore the President and all elected officials to strongly condemn the violence that took place yesterday," he added.

The White House said the decision to withdraw Wolf’s name from consideration was unrelated to the acting secretary’s remarks.