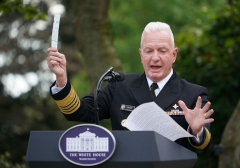 Admiral Brett Giroir, MD, Assistant Secretary For Health, United States Department of Health and Human Services holds up a testing swab as he speaks on Covid-19 testing in the Rose Garden of the White House in Washington, DC on September 28, 2020. (Photo by MANDEL NGAN/AFP via Getty Images)

(CNSNews.com) – Former White House coronavirus testing czar, Adm. Brett Giroir, told Fox News’s “America’s Newsroom” on Thursday that it is possible that coronavirus leaked out of a lab in Wuhan, China, that was part of a bioweapons program.

Host Bill Hemmer pointed out that Giroir told gave a note to the show’s producers saying, “It is not outrageous to hypothesize that the virus could have been part of an offensive bioweapons program and leaked out accidentally.”

“That seems to be discounted by [NIH Director] Dr. Francis Collins and other people. I think the most likely explanation is that it was gain of function mutation work. It leaked out, but unlike the United States, the United States does not have an offensive biological weapons program,” Giroir explained.

“There are multiple open sources of intel that suggest that China has an extensive biological weapons program and that it is integrated between state laboratories, academia and private industry. So It is not crazy as people suggest like Dr. Collins suggested that this could have been part of a bio program. It's possible,” he said.

When asked how firm he is on that possibility, the admiral said, “It is certainly a possibility. This virus is not a great biological weapon if you look at characteristics, but it certainly could have been part of a program, and again, I'm not saying that it was. I'm saying it should still be considered a possibility.

Hemmer pointed out that Dr. Anthony Fauci, director of the National Institute of Allergy and Infectious Diseases (NIAID) said last year that the virus could not have been artificially manipulated the way mutations naturally evolve. However, now Fauci is saying it was most likely transmitted animal to human but is open minded.

Hemmer asked how much “CYA” - “covering your a—” is Fauci doing.

“The statement from last year was completely false. There was no pattern of mutations that suggest that it went right from an animal in a natural situation to humans. There’s still no evidence to show that. So that statement was completely wrong. It was obvious to be antagonistic to President Trump and to the administration, and there is a lot of CYA going on now,” Giroir said.

Giroir said he became convinced that the pandemic started as a result of a lab leak with the World Health Organization (WHO) report in March, “which showed definitively there was no environmental source.”

“There was no intermediary host. There was really nothing linking this to any virus in the natural world, but on the other side, the evidence was becoming compelling. There is a laboratory within five miles of the origin that was doing dangerous research on bat coronaviruses. Sometimes the simplest explanation is that. We do have lab leaks. They’ve happened multiple times,” he said.

“SARS has leaked out of laboratory and even caused secondary deaths. We know that in 1979 anthrax leaked out of a Soviet laboratory and killed 60 people. So lab leaks are not uncommon, and I really think data like people getting ill in November from the laboratory, if that proves true that coincides exactly when we know this virus hit China, so the evidence is there,” Giroir said.

When asked why he didn’t say that a year ago, Giroir said, “I did say it a year ago. I was very clear that the only thing we knew was that there were no obvious fingerprints of this virus being engineered. I always kept open and was very public that it could have been a lab leak.

Hemmer noted that the U.S. government knew that workers in Wuhan became sick in October or November 2019. He wondered why that’s not talked about.

“That was released by the State Department in January. So this is probably a summary of various different intelligence sources. I certainly didn't know that early on, did not know there were people who were ill. Remember, there was a huge cover-up by the Chinese Communist Party, the Chinese government that really locked down all records,” Giroir said.

“There was no way to really understand, but we did see this from the State Department in January. It was confirmed by very credible media outlets that even said they were in the ICU, and remember, with the virus if three people got sick, they were spreading the virus before they went to the hospital, and we know half the people are asymptomatic, so there are a lot of other people asymptomatic spreading it. That’s very distinct of this virus,” he said.

Giroir said that the origins of the coronavirus was rarely talked about among the White House Coronavirus Task Force during the Trump administration.

“Personally, it didn't matter to me when fighting the virus whether it was natural or it leaked. It matters for a lot of other reasons, but to create testing, to create the vaccines, none of that was absolutely essential about where it originated, so we didn't spend a lot of time in the task force talking about that specifically,” he said.