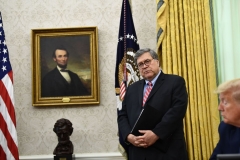 US President Donald Trump (R), listens to US Attorney General William Barr before signing an executive order on social-media companies in the Oval Office of the White House on May, 28, 2020. (Photo by BRENDAN SMIALOWSKI/AFP via Getty Images)

“While many have peacefully expressed their anger and grief, others have hijacked protests to engage in lawlessness - violent rioting, arson, looting of businesses, and public property, assaults on law enforcement officers and innocent people, and even the murder of a federal agent. Such senseless acts of anarchy are not exercises of First Amendment rights,” he said at a DOJ press conference.

They are crimes, designed to terrify fellow citizens and intimidate communities. As I told the governors on Monday, we understand the distinction between three different sets of actors here. The large preponderance of those who are protesting are peaceful demonstrators who are exercising their First Amendment rights.

We have evidence that Antifa and other similar extremist groups, as well as actors of a variety of different political persuasions, have been involved in instigating and participating in the violent activity, and we are also seeing foreign actors playing all sides to exacerbate the violence. The Department of Justice is working to restore order in the District of Columbia and around the nation.

The attorney general said that the DOJ is working with local police, National Guard, and other federal agencies including the FBI; the Bureau of Alcohol, Tobacco, and Firearms (ATF); Drug Enforcement Administration (DEA); Bureau of Prisons; and the U.S. Marshals Service.

“I am pleased to say, especially over the last nights, the demonstrations, while large, have been peaceful. The Justice Department is also working closely with our state and local partners to address violent riots around the country. Our federal law enforcement efforts are focused on the violent instigators,” he said.

Barr said the DOJ is receiving “real-time intelligence” and has “deployed resources to quell outbreaks of violence in several places.” He called on governors, mayors, and other state and local leaders to work closely with the National Guard and the DOJ.

Thus far, the federal government has made 51 arrests for federal crimes in connection with rioting,” the attorney general said, adding that the feds “will continue to investigate, to make arrests, and to prosecute where warranted.”

“When I was attorney general in 1992, riots broke out in Los Angeles following the acquittal by the state of police officers accused of beating Rodney King. Ultimately, the Department of Justice, at my direction, filed federal civil rates charges against his officers. As President Bush assured the nation at that time, ‘The violence will end. Justice will be served. Hope will return.’ The same is true today. The rule of law will prevail,” Barr said.

The attorney general said that the DOJ is conducting “a parallel and independent investigation into possible violations of federal civil rights laws” in the George Floyd case.

“The president has directed me to spare no effort. We are coordinating our work with the attorney general of Minnesota, and, as a matter of comity, the Department of Justice typically lets the state go forward with its proceedings first,” he said.