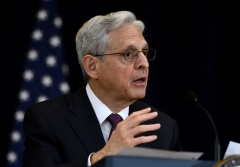 (CNSNews.com) - U.S. Attorney General Merrick Garland announced Friday the appointment of Jack Smith as special counsel to oversee the investigation into whether anyone or any entity “unlawfully interfered with the transfer of power following the 2020 presidential election or the certification of the electoral college vote held on or about January 6, 2021” and the investigation involving classified documents and other presidential records as well as the possible obstruction of that investigation.”

Garland explained that he timed the appointment of special counsel after former President Donald Trump’s announced candidacy for president as well as President Biden’s “stated intention” to run for president again as well.

He also explained that the special counsel’s investigation will not include those present on the grounds of the U.S. Capitol on Jan. 6. Instead, those investigations and prosecutions will remain under the authority of the U.S. Attorney for the District of Columbia.

Such an appointment underscores the department's commitment to both Independence and accountability in particularly sensitive matters. It also allows prosecutors and agents to continue their work expeditiously and to make decisions undisputedly guided only by the facts and the law. The special counsel will conduct parts of the first investigation I just mentioned.

The investigation into whether any person or entity unlawfully interfered with the transfer of power following the 2020 presidential election or with the certification of Electoral College vote held on or about January 6th. This does not include prosecutions that are currently pending in the District of Columbia or future investigations and prosecutions of individuals for offenses committed while they were physically present on the Capitol grounds on January 6th.

Those investigations and prosecutions will remain under the authority of the U.S. Attorney for the District of Columbia. The special counsel will also conduct the investigation involving classified documents and other presidential records as well as the possible obstruction of that investigation.

Today I signed an order appointing Jack Smith to serve as special counsel. The order authorizes him to continue the ongoing investigation into both of the matters that I have just described and to prosecute any federal crimes that may arise from those investigations.

Mr. Smith is a veteran career prosecutor. He began his prosecutorial career in 1994 as an assistant district attorney with the New York county D.A.'s office. In 1999, he became assistant U.S. Attorney for the eastern district of New York, where over the course of nine years he prosecuted matters ranging from gang murders of police officers to civil rights violations.

From 2008 to 2010, he served with the international criminal court where he supervised war crimes investigations. In 2010, Mr. Smith returned to the Justice Department to serve as chief of the public integrity section where he led a team of more than 30 prosecutors who handled public corruption and election crimes cases across the United States.

In 2015 he agreed to serve as the first assistant U.S. Attorney for the middle district of Tennessee, later becoming the acting United States attorney. Most recently Mr. Smith served as a chief prosecutor for the special court in The Hague charged with investigating war crimes in Kosovo.

He will begin immediately and will be returning to the United States from The Hague. Throughout his career Jack Smith has built a reputation as an impartial and determined prosecutor who leads teams with energy and focus to follow the facts wherever they lead. As special counsel, he will exercise independent prosecutorial judgment to decide whether charges should be brought.

Given the work to date and Mr. Smith's prosecution experience, I'm confident this appointment will not slow the completion of these investigations. The men and women who are pursuing these investigations are conducting themselves in accordance with the highest standards of professionalism.

I could not be prouder of them. I strongly believe the normal processes of this department can handle all investigations with integrity. And I also believe that appointing a special counsel at this time is the right thing to do.