Becerra: Budget Says ‘Birthing People’ Not ‘Mothers’ Because Some ‘Do Not Categorize Themselves as Being Male or Female’ 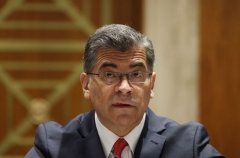 Xavier Becerra, Secretary of the Department of Health and Human Services (HHS), testifies during a Senate Appropriations Subcommittee hearing in Washington, DC, on June 9, 2021. (Photo by TASOS KATOPODIS/AFP via Getty Images)

(CNSNews.com) – HHS Secretary Xavier Becerra tried to explain Wednesday why the Centers for Disease Control and Prevention’s FY 2022 budget request refers to mothers as “birthing people” instead of simply mothers.

On page 12 of the CDC’s FY2022 Congressional Justification, under the heading “Maternal Mortality,” it states: “To help eliminate race-based disparities in outcomes among birthing people and drive down the rate of maternal mortality, the CDC’s FY 2022 request includes an increase of $26.0 million over the FY 2021 Enacted for Maternal Mortality Review Committees (MMRCs).”

On page 18 of the Biden budget request, it states:

During a House Education and Labor Committee hearing “Examining the Policies and Priorities of the U.S. Department of Health and Human Services,” Rep. Tim Walberg (R-Mich.) asked Becerra: “I want to follow up on a question that I know you’ve received in previous hearings, but now that you’ve had time to talk with your team, perhaps you have had time to learn more about the rationale. In reference to efforts to reduce maternal mortality in the Centers for Disease Control and Prevention’s budget justification, the budget uses the term on page 14 of that document uses the term ‘birthing people.’”

BECERRA: Congressman, thank you for the question, and let me try to explain as I did last time that use of the word ‘birthing people’ is an effort to try to be not only inclusive but accurate in the way we describe the individuals involved in this particular matter, and that would include mothers. That would include women of every-- whatever walk of life, but we want to make sure we’re inclusive, and we want to make sure we’re using words that are accurate to convey what is going on.

WALBERG: Let me follow that. At previous hearing, you said the goal was to be precise in the language that’s used. Why is mother not a precise term? That’s fully inclusive in every way, shape, and form? In fact, when we first used that term birthing person or birthing people, mothers and women in general all across my district expressed great concern that that was not a precise term. It was more given to agriculture, and it was pejorative in their mind.

Mother is a term that is special. It’s unique. It speaks specifically to the uniqueness of birth itself and who is capable of doing that thankfully. Can you provide this committee with a definition of birthing person specifically?

BECERRA: Thank you for asking the question in a thoughtful way, because it does require a thoughtful response. Congressman, as you and I know, there are individuals take for example a surrogate, who will not be a mother of that child. There are individuals who do not categorize themselves as being male or female, and what we want to make sure is that we’re not excluding anyone when we use particular terms. Certainly, birthing person would include someone, a woman who considers herself to be a future mother.

WALBERG: Again, as we see all across your budget, mother is used, but one spot, birthing people is put in. There’s a concern that there’s a camel’s nose under the tent for social change and social engineering that goes against precise X and XY chromosomes and science itself. I express strong opposition to that on behalf of mothers and women all across my district, and I believe across this country, there’s a time when we say what we really mean, and a mother is a mother – surrogate or otherwise. The term is understood, Secretary, and I’d encourage you to remove that term.