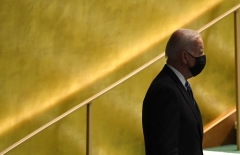 President Joe Biden arrives to address the 76th Session of the UN General Assembly on September 21, 2021 in New York. (Photo by TIMOTHY A. CLARY/POOL/AFP via Getty Images)

“Today’s IPCC Working Group 1 report is a code red for humanity. The alarm bells are deafening, and the evidence is irrefutable: greenhouse gas emissions from fossil-fuel burning and deforestation are choking our planet and putting billions of people at immediate risk. Global heating is affecting every region on Earth, with many of the changes becoming irreversible,” Guterres said in a statement last month.

“This year’s also brought widespread death and devastation from the borderless climate crisis. The extreme weather events that we have seen in every part of the world and you all know it and feel it, represent what the secretary general has rightly called code red for humanity, and the scientists and experts are telling us we're fast approaching a point of no return in the literal sense,” Biden said in a speech to the UN General Assembly.

“To keep within our reach the vital goal of limiting global warming to 1.5 degrees Celsius, every nation needs to bring their highest possible ambitions to the table when we meet in Glasgow for COP26, and then to keep raising our collective ambition over time,” the president said.

“In April, I announced the United States’ ambitious new goal under the Paris agreement to reduce greenhouse gas emissions from the United States by 50 to 52% below 2005 levels by 2030 as we work toward achieving a clean energy economy with net zero emissions by 2050, and my administration is working closely with our Congress to make critical investments in green infrastructure and electric vehicles, to help us lock in progress at home toward our climate goals,” Biden said.

“And the best part is making these ambitious investments isn't just good climate policy. It’s a chance for each of our countries to invest in ourselves and our own future. It's an enormous opportunity to create good-paying jobs for workers in each of our countries and to spur long-term economic growth that will improve the quality of life for all of our people. We also have to support the countries and people that will be hit the hardest and that have the fewest resources to help them adapt,” he said.

“In April, I announced the United States will double our public international financing to help developing nations tackle the climate crisis, and today I'm proud to announce that we'll work with the Congress to double that number again, including for adaptation efforts. This will make the United States the leader in public climate finance,” the president said.

“With our added support together with increased private capital and other -- from other donors, we'll be able to meet the goal of mobilizing $100 billion to support climate action in developing nations,” Biden said.