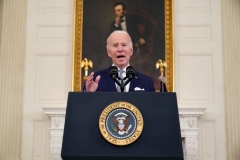 President Joe Biden speaks about the December jobs report on January 7, 2022, from the State Dining Room of the White House in Washington, DC. (Photo by MANDEL NGAN/AFP via Getty Images)

(CNSNews.com) - President Joe Biden painted a rosy picture of Friday’s jobs reports, calling it a “historic day” for the economic recovery, despite adding less than half the number of jobs in December that analysts expected.

As CNSNews.com reported, the Bureau of Labor Statistics says 199,000 jobs were added to nonfarm payrolls in December, well below analysts' estimates of around 422,000.

“I think it's an historic day for our economic recovery. Today's national unemployment rate fell below 4%, to 3.9%. The sharpest one-year drop in unemployment in the United States history. The first time the unemployment rate has been under 4% in the first year of a presidential term in 50 years. 3.9% unemployment rate, years faster than experts said we’d be able to do it, and we have added 6.4 million new jobs since January of last year, one year,” the president said.

“That’s the most jobs in any calendar year by any president in history. How? How did that happen? The American Rescue Plan got the economy off its back and moving again, back on its feet, getting over 20– 200 million Americans fully vaccinated, got people out of their homes and back to work even in the face of wave after wave of COVID,” Biden said.

“We got schools open. We got booster shots. We brought down the poverty rate and went from 20 million people on unemployment rolls a year ago to under 2 million people on unemployment rolls today. America is back to work. There are more historical accomplishments. The increase in America's joining in the labor force was the fastest this year of any year since 1996,” he said.

“Among prime age workers ages 25 to 54, the increase in the labor force participation was the biggest in 43 years. Record job creation, record unemployment declines, record increases in people in the labor force. I would argue the Biden economic plan is working. It's getting America back to work, back on its feet, but the record doesn't stop there," Biden said.

“Today's report also tells us that record wage gains especially for workers in some of America's toughest jobs, women and men who work on the front-line jobs in restaurants, hotels, travel, tourism, desk clerks, line cooks, wait staff, bellmen, they all saw their wages at historic high, the highest in history," the president said.

"Their pay went up almost 16% this year, far ahead of inflation, which is still a concern. Overall, wage gains for all workers who were not supervisors went up more in 2021 than any year in four decades," he said.

Biden pushed back on reports that people were quitting jobs, saying that they were moving onto “better jobs with better pay with better benefits.”

There’s been a lot of press coverage about people quitting their jobs. Well today's report tells you why. Americans are moving up to better jobs with better pay, with better benefits. That's why they are quitting their jobs. This isn't about workers walking away and refusing to work. It is about workers able to take a step up to provide for themselves and their families.

This is the kind of recovery I promised and hoped for, for the American people where the biggest benefits go to the people who work the hardest and are more often left behind. The people who have been ignored before. The people who just want a decent chance to build a decent life for their families, just give it a clear shot.

For them wages are up. Job opportunities are up. Layoffs are down to the lowest levels in decades and there are more chances than ever to get ahead. No wonder one leading economic analyst described what we've accomplished in 2021 as the strongest first year economic track record of any president in the last 50 years.