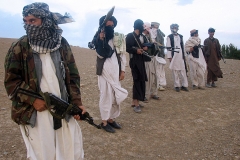 In this picture taken on September 26, 2008, Fighters with Afghanistan's Taliban militia stand on a hillside at Maydan Shahr in Wardak province, west of Kabul. (Photo by STR/AFP via Getty Images)

(CNSNews.com) - President Joe Biden announced Wednesday that the U.S. will begin withdrawing U.S. troops from Afghanistan on May 1 with a deadline of withdrawing all troops by Sept. 11 of this year, the 20-year anniversary of the 9/11 terrorist attacks.

“I’m speaking to you today from the Roosevelt treaty room in the White House, the same spot where on October of 2001, President George W. Bush informed our nation the United States military had begun strikes on terrorist training camps in Afghanistan,” the president said.

“It was just weeks, just weeks after the terrorist attacks on your nation that killed 2,977 innocent souls that turned lower Manhattan into a disaster area, destroyed part of the Pentagon and made hallowed ground of a field in Pennsylvania and sparked an American promise that we would never forget,” Biden added.

“We went to Afghanistan in 2001 to root out al Qaeda, to prevent future terrorist attacks against the United States planned from Afghanistan. Our objective was clear. The cause was just. Our NATO allies and partners rallied beside us,” he said.

Biden said that while he supported military action in Afghanistan when he was in Congress, as vice president during the Obama administration, he visited the region and what he saw reinforced his “conviction that only the Afghans have the right and responsibility to lead their country and that more military force could not create or sustain a durable Afghan government.”

He noted that since Osama bin Laden was killed, “our reasons for remaining in Afghanistan have become increasingly unclear even as the terrorist threat that we went to fight evolved.”

“Over the past 20 years the threat has become more dispersed, metastasizing around the globe,” Biden said.

“When I came to office, I inherited a diplomatic agreement duly negotiated between the government of the United States and the Taliban that all U.S. forces would be out of Afghanistan by May 1, 2021 - just three months after my inauguration. That’s what we inherited, that commitment,” the president said.

“It's perhaps not what I would have negotiated myself, but it was an agreement made by the United States government, and that means something. So in keeping with that agreement and with our national interests, the United States will begin our final withdrawal on May 1 of this year,” he said, pledging that the drawdown will be safe, deliberate, and responsible.

“U.S. troops and forces deployed by our NATO allies and partners will be out of Afghanistan before we mark the 20th anniversary of that attack on September 11th, but we won't take our eye off the terrorist threat,” he said.

Biden pledged that the United States will reorganize its “counter-terrorism capabilities and assets in the region to prevent reemergence of the terrorists with a threat to our land.”