Biden: ‘The Holocaust Happened. Hitler Was a Demonic Figure’ 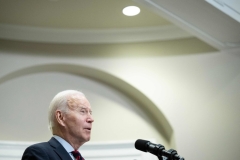 (CNSNews.com) - President Biden seemed to call out rapper Kanye West on Friday, saying that “The Holocaust happened” and “Hitler was a demonic figure.”

“I just want to make a few things clear: The Holocaust happened. Hitler was a demonic figure. And instead of giving it a platform, our political leaders should be calling out and rejecting antisemitism wherever it hides. Silence is complicity,” he tweeted. 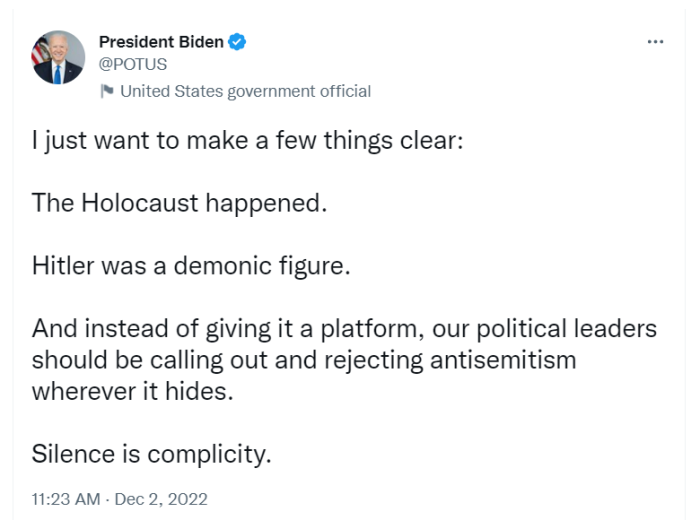 His comments come a day after West, during an interview with “Infowars” radio show host Alex Jones, praised Adolf Hitler and the Nazis, saying, “The Jewish media has made us feel like the Nazis and Hitler have never offered anything of value to the world.

“I see good things about Hitler,” he said.

When asked who the president was referring to in the tweet, White House Press Secretary Karine Jean-Pierre said, “As we have seen an increase in hate speech and anti-Semitism in particular to your question, and you know the president has always stands against that. He is standing with the Jewish community.

“The president for years, including after the hateful march in Charlottesville that drove him to run, his father had said, silence is complicity, and as president of the United States, he feels that it’s important for him to be very clear, and like you’ve also heard him say, the common theme of all forms of bigotry is that hate doesn’t go away. It only hides,” she said.

“The grotesque poison of anti-Semitism is not hiding, and just yesterday, he and President Macron recognized the hundreds of thousands of Americans who gave their lives to overcome the horror of Nazism and keep us free, and so he believes as president it is important to speak up, but again, we’ve all seen it,” Jean-Pierre said. “You guys have asked me this multiple times, the increased hate speech that we have seen on …