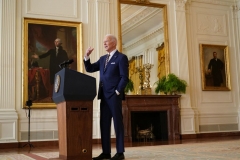 President Joe Biden speaks during a news conference in the East Room of the White House, on January 19, 2022, in Washington, DC. (Photo by MANDEL NGAN/AFP via Getty Images)

(CNSNews.com) - President Joe Biden said Wednesday that he has not overpromised on his agenda despite his domestic agenda and voting reform failing in Congress, but he has actually “outperformed” what people thought would happen.

“I know that some of my colleagues will get into specific issues, but I wanted to zoom out on your first year. Inflation is up. Your signature domestic legislation is stalled in Congress and a few hours from now, the Senate— an effort in the Senate to deal with voting rights and voting reform legislation is going to fail. COVID-19 is still taking the lives of 1,500 Americans every day and the nation’s divisions are just as raw as a year ago. Did you overpromise to the American people what you could achieve in your first year in office, and how do you plan to course correct going for?” a reporter asked.

“Why are you such an optimist? Look, I didn't overpromise, but I have probably outperformed what anybody thought would happen. The fact of the matter is that we're in a situation where we have made enormous progress. You mentioned the number of deaths from COVID. Well it was three times that not long ago. It's coming down. Everything’s changing. It's getting better,” Biden said.

“Look, I didn't overpromise, but I think if you take a look at what we've been able to do, you’d have to acknowledge that we made enormous progress, but one of the things that I think is something that -- one thing I haven't been able to do so far is get my Republican friends to get in the game of making things better in this country,” he said.

The president read a quote by Republican New Hampshire Gov. John Sununu on partisan gridlock and why he didn’t run for the Senate in New Hampshire.

For example, I was reading the other day and I wrote the quote down, so I don't misquote him. A quote from Senator Sununu when he decided that he wasn’t going-- excuse me, Governor Sununu when he decided that he wasn't going to run for the Senate in New Hampshire. Here's what he said. They're all for the most, quote, ‘they were all for the most part content with the speed at which they weren't doing anything. It was very clear that we just had to hold line for two years. Okay. So I'm just going to be a roadblock for the next two years? That's not what I do, Sununu said. He went on to say it bothered me that they were okay with that.’

Then he goes on to say, ‘I said, okay, so we're not going to get stuff done if we win the White House back? Why didn't we do anything in 2017 and 2018? Then he said, how could Republicans Sununu spoke to answer the challenge? He said, ‘crickets, yeah crickets. They had no answer. I did not anticipate that there’d be such a stalwart effort to make sure that the most important thing was that president Biden didn't get anything done.’

Think about this. What are Republicans for? What are they for? Name me one thing they're for. So the problem here is that I think what I have to do in the change in tactic, if you will, I have to make clear to the American people what we are for. We passed a lot. We passed a lot of things that people don't even understand all what’s in it understandably.

Remember when we passed the Affordable Care Act and everybody thought that it really was getting pummeled and beaten, and it wasn't until after we were out of office in that next campaign, that off-year campaign, and I went into a whole -- I wasn't in office - I went into a whole bunch of districts campaigning for Democrats and Republican districts and said that they wanted to do away with healthcare, with Obamacare?

And I started pointing out that if you did that, pre-existing conditions would no longer be covered. They said huh? We didn't know that. We didn't know that, and guess what? We won over 38 seats because we explained to the people exactly what in fact had passed.

As a consequence, no one knew what the detail of the legislation was. They don't know a lot of the detail of what we passed. So the difference is, I'm going to be out on the road a lot making the case around the country with my colleagues who are up for reelection and others making the case of what we did do and what we want to do. What we need to do, and so I don't think I’ve overpromised at all, and I'm going to stay on this track.

One of the things that I remember and I'll end -- I was talking with, you know, Jim Clyburn who was a great help to me in the campaign in South Carolina. Jim said when he endorsed me and there was a clip on television the past couple days of Jim. He said that we want to make things accessible and affordable for all Americans.

That's healthcare. That's education. That's prescription drugs. That's making sure that you have access, access to all the things that everybody else has. We can afford to do that. We can't afford not to do it. So I tell my Republican friends, here I come. This is going to be about what are you for. What are you for, and I lay out what we're for.