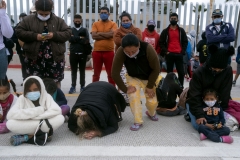 Migrants and asylum seekers demonstrate at the San Ysidro crossing port asking US authorities to allow them to start their migration process in Tijuana, Baja California state, Mexico on March 23, 2021. (Photo by GUILLERMO ARIAS/AFP via Getty Images)

(CNSNews.com) – President Joe Biden said Thursday that the reason why so many illegal immigrants have been trying get into the United States during his administration is because it happens every year during a time when they won’t have to risk dying because of the heat and because of problems in their country of origin.

Speaking at Biden’s first formal press conference since being elected, PBS Newshour White House Correspondent Yamiche Alcindor said, “You have said over and over again that immigrants shouldn't come to this country right now, this isn't the time to come. That message is not being received. Instead, the perception of you that got you elected as a moral, decent man is the reason why a lot of immigrants are coming to the country and trusting you with unaccompanied minors.

“How do you resolve that tension and how are you choosing which families can stay and which can go, given the fact that even though with Title 42 there are some families that are staying? Is there a timeline for when you won't be seeing these overcrowded facilities run by CBP when it comes to unaccompanied minors?” she asked the president.

BIDEN: Look, I guess I should be flattered people are coming because I’m the nice guy, that’s the reason why it’s happening that I’m a decent man or however it’s phrased. That’s why they’re coming, because they know Biden’s a decent guy. Truth of the matter is nothing has changed.

“It happens every year. In addition to that, there is a-- and nobody -- and by the way, does anybody suggest there was a 31% increase under Trump because he was a nice guy and he was doing good things at the border? That's not the reason they’re coming. The reason they’re coming is that it's the time they can travel with the least likelihood of dying on the way because of the heat and the desert, number one. Number two, they are coming because of the circumstances in-country, in-country.

The way to deal with this problem, and I started to deal with it back when I was a United States senator, I mean vice president for putting together a bipartisan plan, over $700 million to do the root causes of why people are leaving. What did Trump do? He eliminated that funding. He didn't use it. he didn't do it.

In addition to that, what he did, he dismantled all the elements that exist to deal with what had been a problem and has continued to be a problem for a long time. He, in fact, shut down the number of beds available. He did not fund HHS to get people, to get the children out of those Border Patrol facilities where they should not be and Not supposed to be more than a few days, a little while, but he dismantled all of that.

So what we're doing now is attempting to rebuild, rebuild the system that can accommodate what is happening today, and I’d like to think it's because I'm a nice guy, but it's not. It's because of what’s happened every year. Let me say one more thing on this, if you take a look at the number of people who are coming, the vast majority, the overwhelming majority of people coming to the border and crossing are being sent back, are being sent back.

Thousands, tens of thousands of people who are over 18 years of age and single people, one at a time coming, have been sent back, sent home. We’re sending back the vast majority of families that are coming. We’re trying to work out now with Mexico their willingness to take more of those families back, but that's what's happening.

So what we are doing is we’re providing for the space, again, to be able to get these kids out of the Border Patrol facilities, which no child, no one should be in any longer than 72 hours, and today I went to-- for example, I used all the resources available to me, went to the Defense Department, and the secretary of defense has just made available Fort Bliss, 5,000 beds, be made immediately available. 5,000 beds on the Texas border.

So we’re building back up the capacity that should have been maintained and built upon that Trump dismantled. It's going to take time.

The president stopped in the middle of his answer to asked if he’s talking too long.

“Am I giving you too long an answer? Because if you don't want the details -- no, no, but I mean I don't know how much detail you want about immigration. Maybe I will stop there,” he said.

Biden then answered a follow-up question on why some migrant families are allowed to stay in the U.S. while others are sent back.

“The only people we’re not going to let sitting there on the other side of the Rio Grande by themselves with no help are children, and what we’re doing there, and it's an important point to understand, I know you understand, I don't mean to say it that way, an important point to focus on, the vast majority of people under the age of 18 coming to the United States come with a telephone number on a wristband, or come with a telephone number in their pocket in the United States - a mother, a father, a close relative, a grandmom or grandpop,” he said.

“What's happening before is it's taking literally weeks and weeks or months before anyone’d pick up the phone to call to see if there really was someone there. We’ve set up a system now where within 24 hours there’s a phone call made as that child crosses the border and then a verification system being put in place as of today to determine quickly whether or not that is a trafficker being called or that is actually a mom, a dad and/or a close relative. They’re establishing that right off the bat,” Biden said.

“If it in fact is mom and dad, dad says to take the extreme case, I've got a birth certificate. Then guess what? We’re getting that kid directly to that parent immediately. So that’s going to reduce significantly-- There's two ways to reduce child populations and circumstances that are not acceptable like being held at a Border Patrol station,” the president said.

“One is to get them to the place where they have a relative and set a date as to when the hearing can be held. The second way to do it is put them in the Health and Human Services facility that we are occupying now, both licensed beds across the country that exist as well as, for example, federal resources like Fort Bliss to get them safely in a place where they can be taken care of while their fate is determined,” he added.