Biden: ‘I Negotiated a Contract No One Else Could Negotiate’ – Only Thing Left Out Was Paid Sick Leave for Railroad Workers 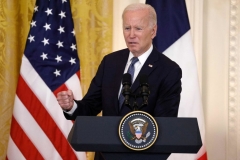 President Joe Biden speaks during a joint press conference with French President Emmanuel Macron in the East Room of the White House in Washington, DC, on December 1, 2022. (Photo by LUDOVIC MARIN/AFP via Getty Images)

(CNSNews.com) – President Biden said Thursday that when he negotiated a contract for railroad workers it didn’t include paid sick leave, but he gave himself credit for negotiating “a contract no one else could negotiate.”

Despite repeatedly referring to himself as “the most pro-union president,” Biden admitted that paid leave was not hammered out in contract negotiations that he was a part of, and he blamed Republicans for not backing legislation giving all Americans paid sick leave.

Biden has been pushing for Congress to get a bill to him by this weekend so he can sign it. The House initially passed a bill granting workers 24 percent raises over five years and one day of personal leave. A separate bill was then passed giving them seven days of paid sick leave.

The Senate on Thursday passed legislation to avert a railroad strike, approving the first measure, but a separate bill giving workers seven days of paid sick leave failed to garner the 60 votes needed for passage.

“Do the freight rail workers deserve more than one day of paid sick leave, like millions of Americans have? And if so, why didn't you negotiate for that when you were helping to negotiate that contract that you now want Congress to impose?” NPR White House Correspondent Tamara Keith asked Biden during a joint press conference with French President Emmanuel Macron on Thursday prior to the Senate vote.

Biden said that he plans to continue to fight for paid leave, not just for railway workers, but for all American workers, and he blamed Republicans for blocking legislation that would give all Americans paid sick leave.

I love you guys. I negotiated a contract no one else could negotiate. Only thing that was left out was whether or not it was paid leave. You know I've been trying to get paid leave, not just for rail workers, for everybody, but that other team, they’re called the Republicans. They voted against it. They said we couldn't do it.

We’re one of the few nations in the world that don't have paid leave for our workers and so what we’re doing is, we can't afford to have – and by the way, in the meantime, they got a 43, 45% increase in salary, etc.

There’s a lot of good things that happen in that, and in fact, this shuts down over the question of one to five paid, or seven or nine, or whatever the number is being negotiated of paid leave days it’s going to immediately cost 750,000 jobs and cause a recession, and so what I made it very clear is that, what was negotiated was so much better than anything they ever had, that it's worth, and they all signed on to it, by the way.

There were only four unions out of the 13 or 14 that didn’t agree. So the majority at the time that I presented it, they asked me to do it. I presented it. They all signed on, but here’s the story. That doesn't mean because we are going to pass this God willing by Friday, by the time -- by the weekend that I'm going to back off of paid leave.

I’m make it really clear. I'm going to continue to fight for paid leave for not only rail workers but all American workers. I imagine it may surprise some of our European friends that there's no paid leave in the united States of America. We are one of the few major countries in the world that don't have it.

We are going to avoid the rail strike, keep the rails running, keep things moving, and I’m going to go back, and we are going to get paid leave, not just for rail workers, but for all workers.