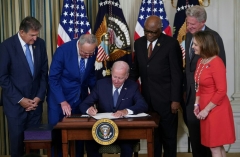 President Joe Biden signs the Inflation Reduction Act of 2022 into law during a ceremony in the State Dining Room of the White House in Washington, DC, on August 16, 2022. (Photo by MANDEL NGAN/AFP via Getty Images)

(CNSNews.com) – President Joe Biden said Tuesday that by signing the Inflation Reduction Act into law, he will be keeping his campaign commitment not to raise taxes on Americans earning less than $400,000 annually.

“I'm keeping my campaign commitment. No one, let me emphasize, no one earning less than $400,000 a year will pay a penny more in federal taxes. The Inflation Reduction Act does so many things that for so many years so many of us have fought to make happen,” he said during a signing ceremony.

“My fellow Americans, that's the choice we face. We can protect the already powerful or show the courage to build a future where everybody has an even shot,” the president said.

The bill “invests $369 billion to take the most aggressive action ever, ever, ever, ever in confronting the climate crisis and strengthening our energy security,” he said.

“It's going to offer working families thousands of dollars in savings by providing them rebates to buy new and efficient appliances, weatherize their homes, get tax credit for purchasing heat pumps and rooftop solar, electric stoves, ovens, dryers,” Biden said. It also “gives consumers a tax credit to buy electric vehicles or fuel cell vehicles new or used, and it gives them a tax credit up to $7,500 if those vehicles were made in America.”

Furthermore, it “provides tax credits that will create tens of thousands of good paying jobs and clean energy manufacturing jobs, solar factories in the Midwest and the South, wind farms across the plains and off our shores, clean hydrogen projects and more all across America.”

“This bill is the biggest step forward on climate ever, ever that’s gonna allow us to boldly take additional steps to meeting all of my climate goals through the ones that we set out when we ran,” the president said, adding that it will ensure “that we create clean energy opportunities in front line and fence line communities that have been smothered by the legacy of pollution and fight environmental injustice that's been going on for so long.”

“Here's another win for the American people. in addition to cutting the deficit by $350 billion last year, my first year in office, and cutting it 1.7 trillion this year this fiscal year, we're going to cut the deficit by another $300 billion with the Inflation Reduction Act over the next decade,” Biden said.

“We're cutting efforts to fight inflation by having the wealthy and big corporations finally begin to pay part of their fair share. Big corporations will now pay a minimum of 15% tax,” he said.