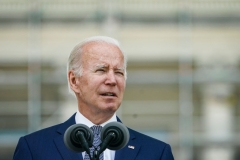 President Joe Biden delivers remarks during the National Peace Officers Memorial Service at the US Capitol in Washington, DC, on May 15, 2022. (Photo by STEFANI REYNOLDS/AFP via Getty Images)

(CNSNews.com) – President Joe Biden marked International Day Against Homophobia, Transphobia and Biphobia on Tuesday, saying that he stands in solidarity with “lesbian, gay, bisexual, transgender, queer, and intersex, (LGBTQI+) people in the United States and around the world” and joins with Americans in reaffirming their “commitment to the ongoing work of upholding human dignity for all people and advancing equality globally.”

“On this day in 1990, the World Health Organization took the long overdue step of declassifying ‘homosexuality’ as a mental disorder. Since that time, there has been much progress. But we continue to witness disturbing setbacks and rising hate and violence targeting LGBTQI+ people in the United States and around the world. This is wrong,” he said in a statement.

“LGBTQI+ people are entitled to all the rights, opportunities, and protections that belong to every human on this planet. LGBTQI+ people are an essential part of families and communities—teachers, first responders, public officials, doctors, lawyers, front-line workers, and friends who enrich and strengthen every single country,” Biden said.

“And make no mistake: hateful legislative attacks against members of our own LGBTQI+ community cannot be tolerated in America or anywhere else. They spur discrimination and can stoke violence. And they are rooted in the same ignorance and intolerance that we see around the world. Hate is hate—and all of us have a responsibility to speak out against hate wherever we find it,” the president said.

“The United States leads the world not only by the example of our power, but by the power of our example. That means making commitments— and following through with action, transparency, and accountability,” he said.

“That’s why, last month, we released the first-ever public progress report on my Administration’s whole-of-government approach to advance the human rights of LGBTQI+ people globally, from supporting local civil society organizations to standing up for LGBTQI+ human rights at the United Nations, and in our engagement with repressive governments,” Biden said.

“By openly reporting on our own progress, the United States hopes to inspire other governments to take similar action to address the needs of their LGBTQI+ communities,” the president added.

“Strong and healthy democracies must ensure LGBTQI+ people can enjoy full participation in society and access all the benefits available to a nation’s citizens. At the first Summit for Democracy, the United States committed to facilitating the participation and leadership of LGBTQI+ community members in democratic institutions, a process we will continue to support,” he said.

"To the LGBTQI+ community, my administration sees you. We stand with you. And we will continue to defend human rights and dignity, at home and around the world," Biden added.