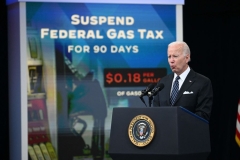 (CNSNews.com) - President Biden called on Congress Wednesday to approve a 90-day federal gas tax holiday, taking 18 cents per gallon off the cost of what drivers pay at the pump.

Although funds collected from the federal gas tax usually go toward the Highway Trust Fund to pay for infrastructure and road repairs, Biden said the suspension won’t affect it.

It’s important because we use it for the Highway Trust Fund to keep our highways going, but what I’m proposing is suspending the federal gas tax without affecting the Highway Trust Fund, and here’s how we do that: With the tax revenues up this year and our deficit down over $1.6 trillion this year alone, we’ll still be able to fix our highways and bring down prices of gas.

We can do both at the same time. By suspending the 18-cent gas tax — federal gas tax for the next 90 days, we can bring down the price of gas and give families just a little bit of relief. I call on the companies to pass this along — every penny of this 18-cents reduction — to the consumers.  This is — there’s no time now for profiteering.

The president is also calling on states to suspend their state gas taxes.

State gas taxes average [another] 30 cents per gallon. Already, some states have acted. In Connecticut and New York, the governors have temporarily suspended their gas tax as well. In Illinois and Colorado, governors delayed theirs to give families a bit more breathing room as well.

In Minnesota, Governor Walz proposes using state budget surpluses to give households a rebate that will help them pay for gas at the pump or other essential needs. I’m calling on more states and local governments to take actions like these.

Thanks to our historic economic recovery, which fortified state budgets that had been hurt in the pandemic, states are now in a strong position to be able to afford to take some of these actions.

Biden acknowledged that a gas tax holiday alone won’t “fix the problem, but it will provide families some immediate relief — just a little bit of breathing room — as we continue working to bring down prices for the long haul.”

Biden accused Republicans of lying about him limiting oil production.

“Third, I’m calling on the industry to refine more oil into gasoline and to bring down gas prices. Let me explain. I know my Republican friends claim we’re not producing enough oil and I’m limiting oil production. Quite frankly, that’s nonsense,” he said.

The president said that last month America produced 12 million barrels of oil per day, which he said is “higher than average under my predecessor, and … we’re on track to set a new record for production next year.”

“My administration also directed the sale of gasoline using homegrown biofuels — ethanol, E15 — this summer, which will boost gasoline supplies and lower the price at thousands of gas stations across America, and I welcome the recent announcement from what’s known as the OPEC+, a group of nearly two dozen oil-producing nations, to increase global oil supply,” Biden said.

The president also had a message for gas station owners: “Bring down the price you are charging at the pump to reflect the cost you are paying for the product.”

He explained that in the past two weeks, the cost of oil fell more than $10 a barrel, which would normally reduce the price at the pump by about 25 cents.

“Yet, so far, gas stations have only reduced prices by a few cents a gallon. Some haven’t reduced prices at all. I’ve heard plenty of explanations from companies and economists about why it normally takes time for these price reductions to reach the consumer,” Biden said.

“I might note that when the price of a barrel of oil goes up, it doesn’t ... take much time for the price at the pump to go up. So, let’s be honest with one another,” the president said.

“My message is simple. To the companies running gas stations and setting those prices at the pump: This is a time of war, global peril, Ukraine. These are not normal times. Bring down the price you are charging at the pump to reflect the cost you are paying for the product. Do it now. Do it today. Your customers, the American people, they need relief now,” he said.

Just look at the facts: Since the start of the war in Ukraine this year, gas prices have risen by almost $2.00 a gallon in the United States, and sometimes more, around the world, but it wasn’t just Putin’s invasion of Ukraine. It was the refusal of the United States and the rest of the free world to let Putin get away with something we haven’t seen since World War II.

I said at the time: Siding with Ukraine during the most serious aggression in Europe since World War Two — defending freedom, defending democracy — was not going to go without cost for the American people and the rest of the free world. We were going to have to pay a price as well — in the cost of military equipment, economic assistance, humanitarian relief, and sanctioned Russian banking industries.

Russia is … one of the largest oil producers in the world. We cut off Russian oil into the United States, and our partners in Europe did the same, knowing that we would see higher gas prices. We could have turned a blind eye to Putin’s murderous ways, and the price of gas wouldn’t have spiked the way it has. I believe that would have been wrong.

I believed then and I believe now: The free world had no choice. America could not stand by and the West could not have stood by — although some suggested at the time — and just watch Putin’s tanks roll into Ukraine and seize a sovereign country. If we did stand by, Putin wouldn’t have stopped.

We had near unanimous support in the Congress — Democrats, Republicans, and independents — for supporting Ukraine, knowing full well the cost. So, for all those Republicans in Congress criticizing me today for high gas prices in America, are you now saying we were wrong to support Ukraine?

Are you saying we were wrong to stand up to Putin? Are you saying that we would rather have lower gas prices in America and Putin’s iron fist in Europe? I don’t believe that.

Look, I get the easy politics of the attack. I get that, but the simple truth is gas prices are up almost $2.00 a gallon because of Vladimir Putin’s ruthless attack on Ukraine, and we wouldn’t let him get away with it, and we’re doing everything we can to reduce this pain at the pump now.

The president also called on car companies to lower the price of electric vehicles “so we never have to pay at the pump in the first place.”

Major auto companies are preparing for 50 percent of future sales to be electric vehicles by 2030, 100 percent by 2035.

We’re already building secure supply chains to build these electric vehicles here in America, and we’re investing almost $100 billion in public transit and rail, for all the studies show that it will take millions of cars off the road and significantly reduce pollution if there’s a serious transportation system available.

Let’s keep accelerating our deployment of homegrown resources — sources of energy like solar and wind and nuclear and hydrogen and carbon capture and storage — and keep developing battery technologies so we can store that power we need when the sun doesn’t shine or the wind doesn’t blow.

Folks, let’s make sure we’re never again forced to pay the price of a menacing dictator halfway around the world. We can deal with the imme- — this immediate crisis of high gas prices and still seize the clean energy future.