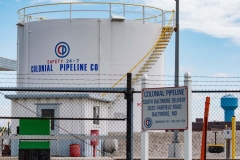 Fuel tanks are seen at Colonial Pipeline Baltimore Delivery in Baltimore, Maryland on May 10, 2021. (Photo by JIM WATSON/AFP via Getty Images)

(CNSNews.com) – There’s no evidence so far to suggest that Russia was involved in a cyberattack that shut down the nation’s largest fuel pipeline that delivers fuel to states on the East Coast from New York to Florida, President Joe Biden said Monday.

The ransomware attack on Colonial Pipeline Co. was reportedly carried out by a criminal gang known as DarkSide that reportedly donates a portion of the money it steals from ransomware to charity.

Biden began a White House press conference on the economy by giving an update on the attack:

I’d like to start by saying a few about the Ransomware cyberattack currently impacting Colonial pipeline. This is something that my administration, our administration has been tracking extremely carefully, and I have been personally briefed every day. The Department of Energy is working directly with Colonial to get the pipelines back online and operating at full capacity as quickly and safely as possible.

The FBI also is engaged to assess and address this attack. The agencies across the government have acted quickly to mitigate any impact on our fuel supply, and over the weekend, at my direction, the Department of Transportation issued an emergency order to loosen restrictions on truck drivers in order to allow more fuel to be transported by tanker.

We are prepared to take additional steps depending on how quickly the company’s able to bring its pipeline back to full operational capacity. The Federal Bureau of Investigation has determined the company’s network was affected by ransomware, and it’s a criminal act obviously.

FBI released details of the attack so others can take steps to prevent being infected. My administration takes issue -- takes this very seriously. We have efforts underway with the FBI and DOJ, Department of Justice, to disrupt them and prosecute ransomware criminals.

My administration will be pursuing a global effort of ransomware attacks by transnational criminals who often use global money laundering networks to carry them out. My administration is also committed to safeguarding our critical infrastructure much of which is privately owned and managed by Colonial.

Private entities are making their own determination on cybersecurity, so to jump-start greater private sector investment in cybersecurity, we launched a new public-private initiative in April.

It begins with a 100-day sprint to improve cybersecurity in the electric sector, and we’ll follow that with similar initiatives in natural gas pipelines, water and other sectors. In addition to companies stepping up, we need to invest to safeguard our critical infrastructure. That's one of the many things my American jobs plan is designed to do.

At the end of a White House press conference on the economy, Biden was asked if he can’t protect infrastructure from a criminal act, how can he protect it from a state actor.

“You can do both, and we will,” the president said.

When asked whether he thinks Russia is involved, Biden said, “I’m gonna be meeting with President Putin, and so far there is no evidence from our intelligence people that Russia is involved although there’s evidence that the actors, ransomware is in Russia. They have some responsibility to deal with this.”