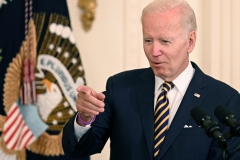 President Joe Biden speaks during a signing ceremony for the PACT Act of 2022, in the East Room of the White House in Washington, DC, on August 10, 2022. (Photo by JIM WATSON/AFP via Getty Images)

(CNSNews.com) – President Biden said Wednesday that the U.S. economy had zero percent inflation last month, because the price of “some things” went up while “the price of other things went down by the same amount.”

Biden seized on news that consumer prices held steady for the month of July, compared to June, and the president promoted it during a signing ceremony for the PACT Act of 2022. He also continued to promote the Inflation Reduction Act in his speech, saying that it will keep inflation from getting worse and “it will bring down the cost of prescription drugs, health insurance premiums and energy costs.”

Before I begin today, I want to say a word about the news that came out today relative to the economy. Actually, I want to say a number: zero. Today we received news that our economy had zero percent inflation in the month of July - zero percent. Here’s what that means. While the price of some things go up—went up last month, the price of others things went down by the same amount. The result – zero inflation last month. People are still hurting, but zero inflation last month.

Economists look at look at a measure of inflation that ignores food and energy prices, and they call it core inflation. That’s about the lowest amount in several years—several months. When you couple that with last week’s blooming jobs reports of 528,000 jobs created last month and 3.5 percent unemployment, it underscores the kind of economy we’ve been building,” the president said.

We’re seeing a stronger labor market where jobs are booming and Americans are working, and we’re seeing some signs that inflation may beginning to moderate. That’s what happens when you build an economy from the bottom up and the middle out. The wealthy do very well, and everyone has a chance. It gives everyone a chance to make progress.

Now I want to be clear. With the global challenges we face from the war in Europe to disruption of supply chains and pandemic shutdowns in Asia, we could face additional headwinds in the months ahead.  Our work is far from over, but two things should be clear. First, the economic plan is working, and second, it’s building an economy that will reward work.

Wages are up this month, provide opportunity to help the middle class and still have work to do, but we’re on track. The second point I want to make is, we need to pass the Inflation Reduction Act right away. It’s the most consequential thing that Congress can do to keep inflation from getting better—from getting worse, keep it moving in the right direction, and it will bring down the cost of prescription drugs, health insurance premiums and energy costs.

This will make big corporations just pay their fair share – nothing more than their fair share. It’s going to reduce the deficit without raising a penny in taxes on people making under $400,000 a year, and It’s far from done in our effort to bring inflation down but we’re moving in the right direction. So some good economic news today and some work ahead.