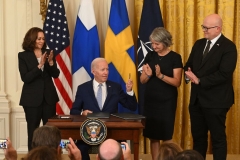 Vice President Kamala Harris (L) looks on as US President Joe Biden holds up a pen to Ambassador Mikko Hautala, of the Republic of Finland, and Ambassador Karin Olofsdotter, of the Kingdom of Sweden, during a signing ceremony for the Instruments of Ratification for the Accession Protocols to the North Atlantic Treaty for the Republic of Finland and Kingdom of Sweden, in the East Room of the White House in Washington, DC, on August 9, 2022. (Photo by SAUL LOEB/AFP via Getty Images)

(CNSNews.com) – President Biden on Tuesday signed the NATO ratification documents for Finland and Sweden on Tuesday, and he credited the United States with thwarting Russian President Vladimir Putin’s attempts to “break us apart,” when in actuality, he strengthened the “transatlantic alliance.”

“The United States is committed to the transatlantic alliance. Together with our allies and partners, we’re going to write the future we want to see — the future we want to see, and in a moment when Putin’s Russia has shattered peace and security in Europe, when autocrats are challenging the very foundations of a rule-based order, the strength of the transatlantic alliance and America’s commitment to NATO is more important than it has ever been,” he said during a signing ceremony at the White House.

“That’s why, in June, in Madrid, at a pivotal NATO Summit, all 30 nations came together to invite Finland and Sweden to apply. It was a display of allied unity, allied strength, and allied resolve — proof that NATO’s door remains open to countries in Europe that share our values and that meet the high standards of our alliance,” the president said.

“He wanted the Findalization [Finlandization] of NATO, but he’s getting the NATOization of Finland —— along with Sweden,” the president said.

“In seeking to join NATO, Finland and Sweden are making a sacred commitment that an attack against one is an attack against all.  It’s Article 5 of the Washington Treaty and the core — the very core of our alliance. and our allies’ committed to Article 5, and it’s stronger than ever — that commitment,” he said.

“The only time in history Article 5 has been invoked was on 9/11, when the United States was attacked and all our Allies rallied to our side.  The United States will never forget that, and we will never fail in our pledge to defend every, every, every inch of NATO,” Biden said. “That’s why, together with our allies, we’re taking steps to reinforce NATO’s eastern flank and strengthen our deterrence against any threats of aggression toward the alliance.”

The president said that the NATO alliance will be “better able to meet the new challenges of a changed European security environment with two strong, reliable, highly capable, new allies in the High North.

“You know, NATO was formed out of the wreckage of World War Two, as we all know,” Biden said, adding that “Wars have repeatedly riven a continent, engulfed the world in conflicts, and there’s no way to avoid that if we’re not together.

“NATO laid a new foundation for lasting peace and security, and through more than seven decades that followed, NATO has proved the indispensable alliance, committed to a Europe whole, free, and at peace,” the president said.