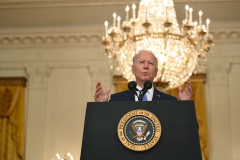 President Joe Biden speaks about the economy and the middle class, in the East Room of the White House in Washington, DC, on September 16, 2021. (Photo by BRENDAN SMIALOWSKI/AFP via Getty Images)

(CNSNews.com) - President Joe Biden on Friday defended his handling of the Afghanistan withdrawal and attempts to get his economic plan through Congress despite growing frustration among his supporters over whether he has delivered on his campaign promise.

After delivering remarks about the COVID-19 response and booster vaccinations for the elderly and those who are immunocompromised, NBC White House Correspondent Peter Alexander asked, “You came into office on a message of competence and unity. We've witnessed what’s happened in the country over the last several months.

“We’ve seen the chaotic troop withdrawal from Afghanistan, the threat of a government shutdown right now, and Democrats, members of your own party, are still divided over your agenda going forward. What do you say to Americans who say that you have not delivered on that promise?”

Biden said that he always said it would take a year for him to deliver on his agenda, and he said the timeline of that has been thwarted by the effects of the hurricanes that hit the United States during his time in office as well as the hesitancy of people to get vaccinated against the coronavirus.

He also blamed former President Donald Trump for the “state of affairs,” saying that there was no plan for getting people vaccinated when he took office.

Remember I said it’s gonna take me a year to deliver everything I'm looking at here. That’s number one. Number two, take a look at what I inherited when I came into office, when I came into office, the state of affairs and where we were. We had four million people vaccinated. We had no plan. I mean I could go down the list. So, you know, part of it is dealing with the panoply of things that landed on my plate. I’m not complaining. It's just the reality. It’s reality, number one.

There’s a solution in the proposal that I put forward and the plans we're now debating in the United Sta-- among ourselves and debating in Congress is the plan, the essence of the plan I laid out at the beginning, and so I'm confident that at the end of the day we are going to be able to get that done. The second point I’d like to make, we talk about price tags. It’s zero price tag on the debt.

We're paying. We’re gonna pay for everything we spend. It's not -- people understandably, ‘well, you know, it started off at $6 trillion. Now it’s 3.5 trillion. Now it’s, is it going to be 2.9? It’s going to be zero, zero because in that plan that I put forward, and I said from the outset, I said I'm running to change the dynamic of how the economy grows. I'm tired of trickle-down.

Trillionaires and billionaires are doing very, very well. You all know. You’ve all reported it. In the middle of this crisis, but hard-working people and middle class people are getting hurt, and so I provide for, for example, a tax cut if you have a child. You get a refundable tax credit. It's reduced hunger in America by 40%, literally for children.

You have the whole notion of being able to provide for day care for your children, getting people back to school, etc. It’s all paid for. It’s all paid for but a lot of these are flat tax cuts that exist within my proposal, and they are being calculated as if the cost of the childcare tax credit is of cost to the government. It’s not. It's reducing taxes, reducing taxes, not increasing taxes.

Now, part of the problem is I had hoped -- I hadn't planned on although I kind of anticipated it might happen - I hadn't planned on the 178-mile top wind hurricanes going to Louisiana and 20 inches of rain in New York and New Jersey and an area as big as the state of New Jersey burning down in the west, and so what I had hoped I would be doing, I do what I did in the campaign.

I’d be out making the case about what my plan contained, and it’s been very much curtailed by a whole range of things, and so I think that it's understandable, I think it's understandable people being frustrated. I think they’re frustrated as well by the fact that not just members of Congress - Democrats and Republicans - frustrated by, you know, I thought this was going to be better. I thought everything was working out.

We were moving along on COVID-19, and now we have all these people who refuse to get a shot and now look at the people dying, large numbers of people dying, so I guess I think it’s a totally legit-- obviously, it’s a legitimate question you've asked, but I think putting it in context here, it’s going to take some time here, and I know I always kid you when you all ask me about, ‘well, what about are you going to get A done, B done, C done?’

I say you want to negotiate. I”m being a bit facetious obviously, but here’s the deal. This is going to end up, I believe, we’re going to end up getting both the pieces of my economic legislation. The first piece - the 1.9 - fundamentally changed the structure and the nature of the economy in this country even though remember it got clobbered. It was this, all this terrible thing. No Republican voted for it.

We got real economic growth. Now we're at this stalemate at the moment and we’re going to have to get these two pieces of legislation passed.

Both need to be passed, and they’ll have a profound impact, according to, not just Joe Biden, but according to Wall Street, according to the IMF, according to international organizations, and so -- and then there’s you know, I'm going to be having a meeting today with the quad, with the leaders of the -- the leader of India, Japan and Australia, and we're going to be talking about Afghanistan, which is a legitimate thing for people to talk about, but the truth of the matter is, the end of the day is, we were spending $300 million a day for 20 years.

There’s no easy way to end that, and we're still getting people out but it is really -- there is no picture book way to say okay, the war is ended, let's get everybody out and we'll go home. No war’s ever ended that way other than there’s been a surrender and a totally different circumstance.

So anyway there’s a lot, I'm sure, along the line that there are things I could have done better, but I make no apologies for my proposals, how I'm proceeding, and why I think by the end of the year we'll be in a very different place.