Biden Sets New Goal: 70% of Adults With at Least One Shot by July 4th 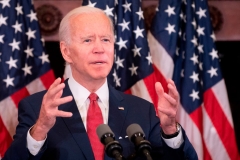 (CNSNews.com) - President Joe Biden announced on Tuesday that he is setting a new goal in the attempt to vaccinate against the coronavirus - having 70 percent of adult Americans with at least one shot by the Fourth of July.

“Two months from today, families across the country are going to celebrate the fourth of July. Our goal by July 4th is to have 70% of adult Americans with at least one shot and 160 million Americans fully vaccinated. That means giving close to 100 million shots, some first shots, others second shots, over the next 60 days. Of course, Americans can still get shots after July 4th, but no one should wait. Let's try to hit that 70% mark, at least with one shot before that day,” he said.

The president also talked about moving into a new phase: vaccinating adolescents between 12 and 15. The COVID-19 vaccines are already approved for everyone aged 16 and over.

“Our new phase will focus on three areas. First, kids, children between the ages of 12 and 15 years of age. They're not yet eligible for a vaccine. The FDA scientists are currently reviewing the data to decide if and when to authorize that age range for vaccinations,” Biden said.

“The FDA and the FDA alone will make that decision, but today, I want American parents to know that if that announcement comes, we are ready to move immediately, immediately move to make about 20,000 pharmacy sites across the country ready to vaccinate those adolescents as soon as the FDA grants its okay,” he said.

In addition, the president announced that teens “who are on the move” can get their first shot in one place and their second shot elsewhere.

“Most Americans have a vaccination site about as close as their house is near to a neighborhood school. We’re also going to slip vaccines directly to pediatricians, ship them to pediatricians during the following weeks so parents and their children can talk to their family doctor about it and get the shot from a provider they trust the most - easy, fast, and free - and if teens are on the move this summer, they can get their 1st shot in one place and a 2nd shot elsewhere,” he said.

While adolescents are at low risk of serious illness from COVID, “they can still get sick and spread the virus to others,” Biden said, “so my hope is that if the vaccine is authorized, parents will take advantage of it and get their kids vaccinated.”

“The second area of focus is making it more convenient for everyone to get a vaccine. We know that many adults have not been vaccinated because they have found it too confusing or too difficult or too inconvenient to get a shot. So, for those having trouble finding a location or making an appointment, we're going to make it easier than ever,” the president said, adding that people can find the closest vaccination location by going online to vaccines.gov.